U.S. stocks swooned for a second day Thursday after the Federal Reserveraised benchmark interest rates and said that it would continue to let its massive balance sheet shrink at the current pace. Fears of a government shutdown also sent stocks tumbling to new lows Thursday afternoon.

The Dow Jones Industrial Average fell 464.06 points to 22,859.6, bringing its two-day declines to more than 800 points and its 5-day losses to more than 1,700 points. The S&P 500 fell 1.5 percent to finish at 2,467.41 as technology stocks underperformed. The Nasdaq Composite fell 1.6 percent and closed at 6,528.41, briefly dipping into bear market territory amid big losses in Amazon and Apple. The Nasdaq is 19.7 percent below its recent high. Companies in the S&P 500 have lost a total of $2.39 trillion in market cap this month. The Cboe Volatility Index — one of the market’s best gauges of marketplace fear — rose above 30.

The Dow and Nasdaq posted their lowest closes since October 2017, while the S&P 500 finished at its lowest level since September 2017.

The Dow and S&P 500, which are both in corrections, are on track for their worst December performance since the Great Depression in 1931, down more than 10 percent each this month. The S&P 500 is now in the red for 2018 by 7.7 percent. 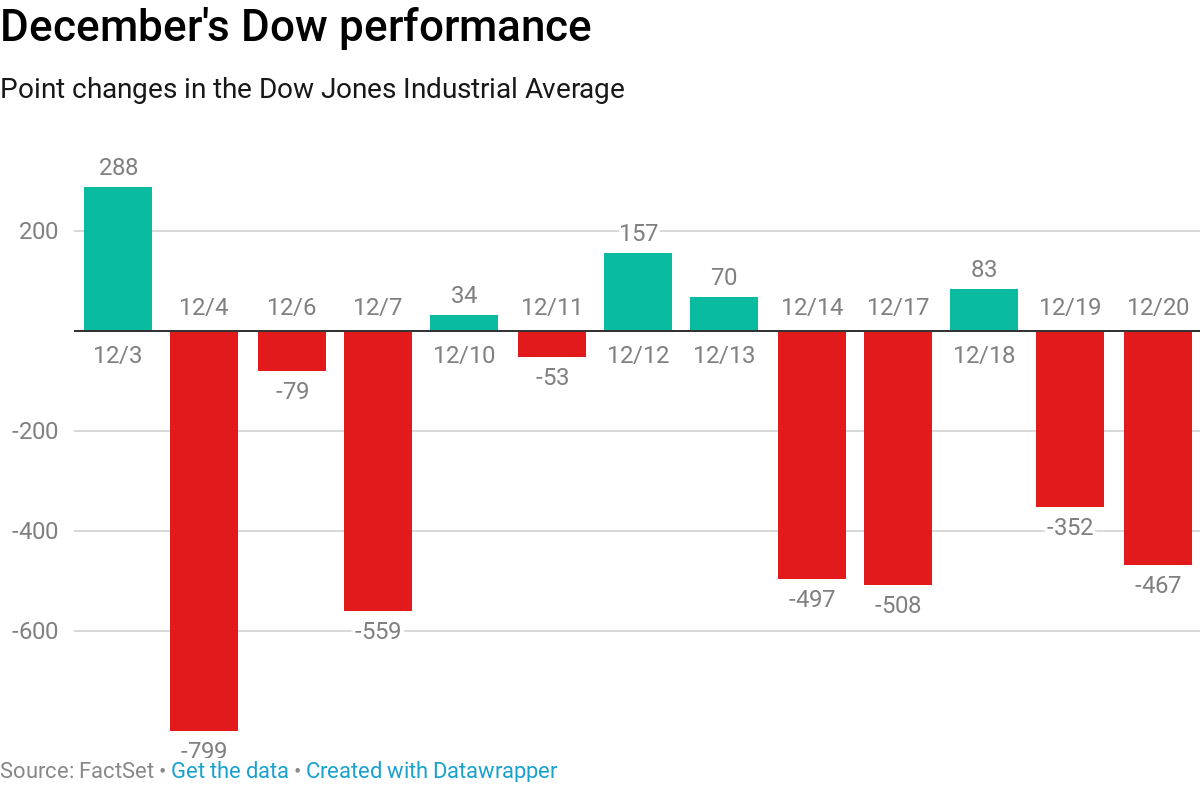 Stocks fell to the low for the day after U.S. House of Representatives Speaker Paul Ryan announced that President Donald Trump would not sign a temporary government funding resolution.

For as bad as it was, it could have been worse. The Dow was down 679 points at its low.

The moves Thursday came one day after the Fed decided to hike its benchmark overnight lending rate by one quarter point in the prior session. The Dow fell more than 350 points following the Fed’s decision and pushed the major indexes to new lows for the year.

Commenting on the central bank’s decision, renowned hedge fund manager David Tepper said in an email to CNBC’s Joe Kernen that Powell “basically told you the Fed put is dead ” and so investors should consider cash as a decent investment.

For traders, the Fed’s statement and Chairman Jerome Powell’s subsequent press conference on Wednesday did not suggest that the central bank would slow its pace of rate hikes as quickly as some had hoped. Many market participants cited the Fed’s decision to allow its balance sheet to run off at its current pace as reason for the market volatility.

“We, too, were very vocal in recommending heavily that the Fed not hike yesterday,” said Julian Emanuel, chief equity strategist at BTIG.

“This is all about the speed of things,” Emanuel added. “The problem with ignoring the consequences of the balance sheet reduction really tells you that the Fed is not paying attention to that fact that financial markets correct much more rapidly on the downside than they do in bull markets to the upside.”

The Fed currently is allowing $50 billion a month to run off its massive debt balance sheet as its securities mature. The balance sheet is mostly a collection of bonds the central bank purchased to vitalize the economy during and after the financial crisis.

The U.S. Senate on Wednesday approved funds for several federal agencies to keep them operating through Feb. 8 without the $5 billion to build a wall on the U.S.-Mexico border that President Donald Trump had demanded. House Speaker Paul Ryan announced later Thursday afternoon that Trump would not sign the temporary funding bill without funding for the wall.

“There are only three things that matter: earnings, interest rates, and the dollar,” she added. “I think the more concerning thing is that we’re starting to see in earnings announcements that it seems as if the momentum is slowing in more industries than even a month ago.”

Also weighing on sentiment Thursday, the Trump administration and more than a dozen international allies condemned Beijing for what the coalition views as continued efforts by the Chinese to steal other countries’ trade secrets.

The mass reprimand against China’s actions represents a growing view that the Asian nation is defying international norms of fair economic practice. The U.S. and China are in the middle of a bitter trade dispute, with both nations slapping tariffs on billions of dollars worth of each others’ imported goods.

The market’s has more to do with tax loss selling and forced redemptions, said Peter Boockvar, chief investment officer at Bleakley Advisory Group. Boockvar added that the shutdown is not a factor and that the S&P broke through February’s lows.

Energy stocks were the worst performer as oil prices plummeted to a 17-month low on fears of a global economic slowdown.