Yellen warns of another potential financial crisis: ‘Gigantic holes in the system’ 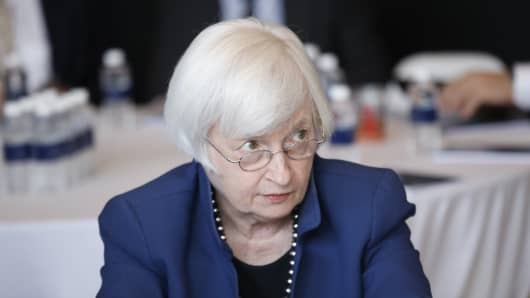 Former Federal Reserve Chair Janet Yellen told a New York audience she fears there could be another financial crisis because banking regulators have seen reductions in their authority to address panics and because of the current push to deregulate.

“I think things have improved, but then I think there are gigantic holes in the system,” Yellen said Monday night in a discussion moderated by New York Times columnist Paul Krugman at CUNY. “The tools that are available to deal with emerging problems are not great in the United States.”

Yellen cited leverage loans as an area of concern, something also mentioned by the current Fed leadership. She said regulators can only address such problems at individual banks not throughout the financial system. The former fed chair, now a scholar at the Brookings Institution, said there remains an agenda of unfinished regulation. “I’m not sure we’re working on those things in the way we should, and then there remain holes, and then there’s regulatory pushback. So I do worry that we could have another financial crisis.”

In the wake of the financial crisis, some agency regulatory powers were vastly expanded, but others, for example, the ability of the Fed to lend to an individual company in a crisis, were curtailed. Current Fed officials have pushed back against criticism that their reforms are making the system riskier, saying they are making the system more efficient.

Speaking in London in June 2017, shortly after leaving office, Yellen had said she did not believe there would be another financial crisis in our lifetimes because of financial reforms. However, she did warn at the time about the deregulatory efforts just then underway.

Yellen did not comment about the current financial or economic situation except to say, “Interest rates are low. I believe they’re likely to remain lower than they’ve been in past decades.” She noted that in a typical recession, the Fed cuts rate by 5 percentage points while the “normal level” of short-term interest rate is usually around 3 percent. “That means there’s much less scope to cut short-term rates than there’s been historically in the United States,” Yellen said.

Discussing the history of the Fed’s response to the crisis, Yellen said the Fed “probably could have done more” quantitative easing but was held back in part by public criticism of the Fed’s bond-buying program. “At the margin, I think that was something that concerned people about pushing asset purchases a lot further.”