The Dow Jones Industrial Average dropped 464 points, with Caterpillar and 3M as the biggest decliners. The S&P 500 plunged 1.9 percent as the industrials and energy sectors underperformed. The Nasdaq Composite plummeted 2 percent, entering correction territory as investors continue to dump tech-related shares such as Amazon and Netflix. The small-caps Russell 2000 dropped 1.8 percent and turned negative for the year.

The S&P 500 was on pace for its fifth straight weekly decline and traded below the lows hit earlier this month during this ongoing sell-off. The major indexes are all down at least 5.9 percent for October. 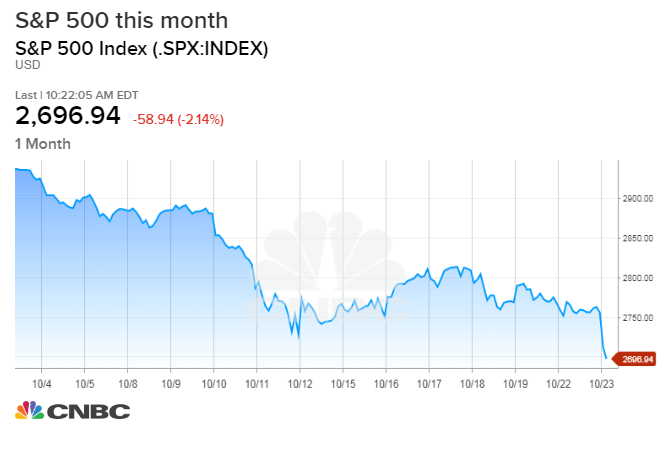 Caterpillar dropped more than 8 percent following the release of its results. The company said its manufacturing costs rose due to higher material and freight costs. Material costs were driven by higher steel prices and tariffs. This drop adds to Caterpillar’s steep monthly losses. Through Monday’s close, the stock is down 15.6 percent for the month.

The U.S. and China have implemented tariffs on billions of dollars worth of their goods this year, increasing costs for companies and raising fears that tighter global trade conditions could slow down the global economy. Negotiations between the two countries have stalled recently, increasing fears that this spat will be prolonged.

“We just look like we’re getting further away from a deal with China,” said Art Hogan, chief market strategist at B. Riley FBR. “The ramifications of a prolonged trade war are really seeping into investors’ minds right now.”

“I think we’re coming to a capitulation point,” he said.

Shares of 3M fell more than 6 percent after its quarterly earnings and revenue missed expectations. The company also trimmed its earnings outlook for 2018.

Bank of America declined 2 percent and is now down more than 9 percent for October as investors fretted that rising mortgage rates would crimp loan growth. Higher short-term rates may increase competition for bank deposits as well. Banks led the market lower on Monday.

The latest bout of selling comes during the busiest week of the earnings season, with more than 150 members of the S&P 500 set to report. Of the companies that have reported thus far, 79.6 percent have topped analyst estimates for earnings, according to FactSet.

“US corporate earnings season has started with more of a whimper than a bang,” said Nick Colas, co-founder of DataTrek Research, in a note. “Yes, companies are beating expectations, but by less than usual.”

“This week has the chance to turn things around with 32% of the S&P 500 reporting. Still, it is now clear that we are past peak earnings momentum,” Colas added.

Investor focus is largely attuned to developments in Saudi Arabia, after the country confirmed Jamal Khashoggi, a journalist and critic of the Saudi regime, was killed in the country’s consulate in Istanbul, Turkey.

—CNBC’s John Melloy and Ryan Browne contribute to this report.