Wall Street is trying to rebound from steep losses this month. The major indexes are all down at least 4.3 percent through Monday’s close amid fears of rising interest rates and a slowdown in the global economy.

“You need the market to calm down for investors to jump back in,” said Jeremy Klein, chief market strategist at FBN Securities. “Hopefully, earnings will help with that.”

Several other companies are scheduled to report earnings this week, including Dow members 3M, McDonald’s, Caterpillar and United Technologies. Amazon and Alphabet are also set to report this week.

The current earnings season is off to a good start thus far. According to data from FactSet, 82 percent of the S&P 500 companies that have posted earnings have topped expectations. 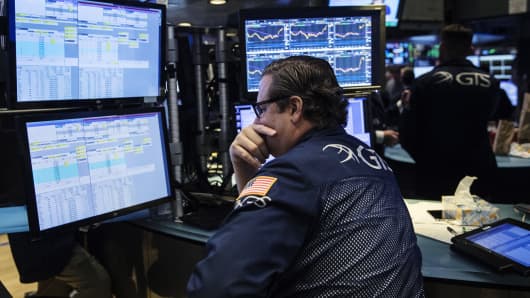 However, “there are challenges that we face now,” including rising interest rates, the midterm elections and U.S.-China trade tensions, said Jeremy Siegel, a longtime stock bull and professor at the Wharton School. “I’m looking flattish” for the coming year, he added.

Investors are also grappling with increasing geopolitical tensions. A Saudi official provided this weekend a new account of the death of journalist Jamal Khashoggi. In it, the official says a team of 15 Saudi nationals was sent to confront Khashoggi and threatened to drug and kidnap him. Khashoggi was then killed in a chokehold when he resisted. This deviates from a prior official statement from Saudi Arabia, which said Khashoggi died in a fistfight at the Saudi consulate in Instanbul.

The Shanghai Composite rose more than 4 percent to notch its best day since March 2, 2016. The sharp move higher comes after Chinese authorities pledged to support China’s economy and offset the negative impact of U.S. tariffs. They made that pledge after reporting weaker-than-expected economic growth for the second quarter.

“A deceleration in growth may put China more on the defense when it comes to trade negotiations, particularly relative to a US economy that continues to grow above trend,” said Katie Nixon, CIO at Northern Trust Wealth Management. “Trade is a key investment risk, and the resolution of the dispute with China may act as a drag for the foreseeable future.”

Chinese stocks are still down sharply this year despite Monday’s jump. The Shanghai Composite has plummeted about 20 percent in 2018 and is down 21.4 percent over the past year.