What every tech company needs: A cardiologist 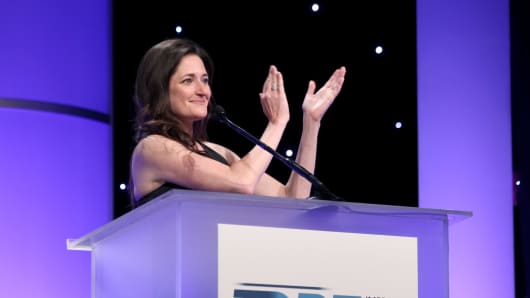 Apple hired Alexis Beatty, a cardiologist, to its growing health team in July, according to a LinkedIn search. Amazon hired Maulik Majmudar, also a cardiologist, the following month. Alphabet‘s life sciences companyVerily named Jessica Mega as its chief medical officer almost three years ago. Mega, of course, is a cardiologist.

This might just be a coincidence. Cardiologists tend to be well-educated, hard-working people, and big tech companies have a track record of recruiting those.

But in recent years, all of these companies have started to invest in products and devices that are targeted to millions of people who could benefit by tracking their heart health.

Apple’s smartwatch now includes an electrocardiogram, which can detect heart rhythm irregularities. Verily’s study watch, which is designed for clinical trial research, also tracks heart rate and heart rhythm, and it’s doing a lot of work in chronic disease management. Another Alphabet team, Google Fit, worked closely with the American Heart Association for its design revamp. Amazon‘s plans in the cardiology space are less clear, but the company does have a secretive research and development team under an electrical engineer and former Google X employee called Babak Parviz that is working on a variety of health care projects.

So the more likely explanation is that tech companies are interested in health care, and they have all come to the conclusion that cardiology should be an early (if not initial) target.

Heart disease is the number-one killer in the world, and strokes are among the leading causes of death as well.

And that’s not all that cardiologists treat. “Our scope covers other common disease such as high blood pressure, which impacts about a third of people in the U.S. — 75 million Americans — as well as lipid and cholesterol disorders,” said Mo Elshazly, a cardiologist and assistant professor of medicine at Weill Cornell Medicine.

Many cardiologists are also experts in nutrition and exercise science, which impacts a huge number of people who are committed to staying healthy. That’s useful for the teams within the largest tech companies that are more focused on wellness and fitness applications, rather than on health and medical. Alphabet has Google Fit. Apple has a fitness group for its Apple Watch. And Amazon is looking at health and wellness applications for its Alexa voice assistant.

Cardiology is one of the most well-studied fields in medicine, meaning there’s already a lot of evidence to understand the root causes of heart disease, as well as how to prevent it. That’s attractive for tech companies, which tend to base their development decisions on data.

Some companies are also interested in running studies of their own to learn more about cardiovascular disease, which their on-staff cardiologists could support. Alphabet’s Verily is funding longitudinal research, called Project Baseline, to understand why healthy people get sick, and Apple is working with Stanford on a study to use its Apple Watch to detect heart rhythm irregularities in a diverse population.

Their consumer products are already making a difference

Let’s take Apple, as an example. The company launched its first Apple Watch model with a heart rate sensor, never expecting that people would use it discover that they were pregnant, at risk for a heart attack or experiencing a potentially dangerous irregular heart rhythm.

But as people began sharing examples of how the Apple Watch saved their life, the company started to invest heavily in the science and technology to drive more of these stories. A lot of that work culminated in the first-ever clearance for a heart rhythm sensor called an ECG for Apple Watch earlier in the summer.

As Apple COO Jeff Williams recently explained, the journey into health was an organic one that just make sense. And heart health, given its sheer importance, seemed like the right place to start.

“Quite honestly, we’ve been really surprised with the deluge of letters and emails we’ve gotten where just the simple heart rate monitor was able to have such an impact on people’s lives. And we’ve been really inspired and we want to do even more.”