Manhattan real estate is now in a year-long correction 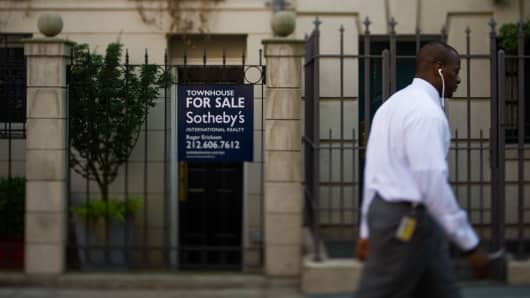 Craig Warga | Bloomberg | Getty Images
A pedestrian walks past a Sotheby’s ‘For Sale’ sign displayed outside of a townhouse in New York.

What started as a blip is now a year-long slump for Manhattan real estate. And it shows no signs of turning around.

Total real estate sales in Manhattan fell 11 percent in the third quarter compared with a year ago, marking the fourth straight quarter of double-digit declines, according to new data from Douglas Elliman Real Estate and Miller Samuel Real Estate Appraisers & Consultants. It was also the first time since the financial crisis that resales of existing apartments fell for four straight quarters.

Prices fell, inventory jumped and discounts were higher and more common. Real estate brokers say the Manhattan real estate market is suffering from an oversupply of luxury units, a decline in foreign buyers and changes in the tax law that make it more expensive to own property in high-tax states.

“We’re in reset mode, and I think we still have a little way to go,” said Jonathan Miller, CEO of Miller Samuel. “It’s way too early to think about the market seeing significant improvement.”

The average price of a Manhattan apartment fell 4 percent during the quarter, to $1.93 million, while the median price fell 5 percent over the last year to $1.1 million. There is now a seven-month supply of apartments, up from five months in the third quarter of 2017.

While the top of the Manhattan market has been under pressure for over a year, the third quarter added a new problem: stress in the market for entry-level apartments.

“Before, it was the top of the market that was weak and the bottom was strong,” Miller said. “Now the market has been flipped on its head.”

But the high end also continues to come under pressure from the supply of new condo towers being built in Manhattan —many of which have been pulled off the official market and are now sitting idle as “shadow inventory” that will keep a lid on prices.

The average sales price in Manhattan’s luxury market — the top 10 percent by sales price — dropped 12 percent in the quarter and inventory soared by 27 percent. Sales of new development fell by 22 percent.

Miller said that overall sales levels and prices are still on the higher side or “right in the middle” of their historical averages. But he said that after the parabolic peaks in 2014 and 2015, a correction was inevitable.

“It’s not like we’re in some deep dark hole,” he said. “This isn’t anything like the first quarter of 2009. We’re resetting to a lower level, but it’s still not low.”