America is winning the trade war and here’s the proof, market watcher says

The U.S. and China fired their latest billion-dollar shots in the escalating trade war this week.

One market watcher is ready to declare a winner.

“You vote with your dollars and you look at the U.S. markets since the start of the trade war and it’s done quite well. China really hasn’t,” Steve Chiavarone, portfolio manager at Federated, told CNBC’s “Trading Nation” on Wednesday.

The S&P 500 and Dow broke records on Thursday, while the Shanghai composite was stuck in a bear market. The Chinese stock market index has fallen 24 percent since its highs set in late January.

The monetary impact of tariffs also tips the trade war in favor of the U.S., said Chiavarone.

“When we add up all the impact of tariffs, they come up to just a fraction of the stimulus being added into the economy in the U.S. and I think the market is really starting to ferret that out,” he said.

By Chiavarone’s calculation, the sum of tariffs over the next three years amounts to just one-tenth of the effect of stimulus. He estimates that tax cuts, repatriation and government spending should bring in around $2 trillion through to 2020, while this round of tariffs could total $200 billion over the same stretch. 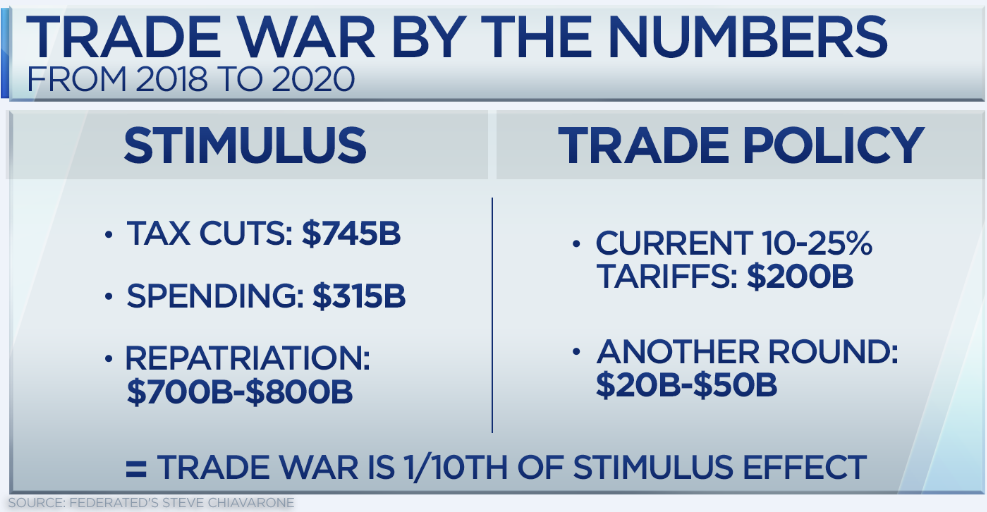 The U.S. winning this trade war is crucial for its standing as an economic powerhouse in the next Industrial revolution, said Chiavarone. He explains that the next revolutionary wave hinges on key technologies such as automation, artificial intelligence, robotics, the internet of things, 3D printing and blockchain.

“If you control the technologies of the next Industrial Revolution, you’re going to be the world’s pre-eminent economic power. We control those today. The Chinese would like to and therein lies that conflict,” said Chiavarone. “Ultimately I think it’s something that the market feels is worth us exploring.”

Chiavarone expects U.S. stocks to continue to drive higher as the Trump administration makes progress in its other trade deals such as NAFTA.

“The U.S. still remains a very attractive place to invest,” said Chiavarone. “We think the trade headlines could get a little bit better and so we remain steadfast on our bullish view on the U.S.”

Disclaimer
This entry was posted in Politics and Government, Trade. Bookmark the permalink.