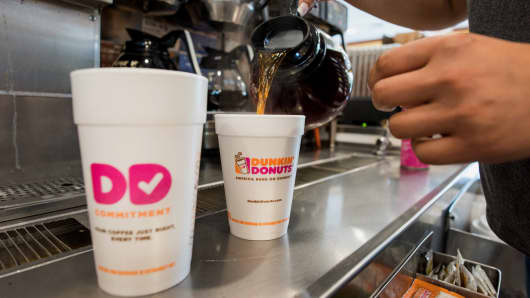 Once again, investors are pondering whether Dunkin’ Brands will be sold.

Shares of the company spiked more than 3 percent Tuesday to an all-time high of $76.12 on speculation that the doughnut chain may be a potential acquisition target.

Dunkin’ has long been considered a takeover prospect for JAB Holding, but now the brand could be a candidate for buyout by Coca-Cola, Don Bilson, analyst at Gordon Haskett, wrote in a research note Tuesday.

On Friday, Coke made the largest brand acquisition in its history, purchasing British coffee chain Costa for $5.1 billion. If Coke decided to continue to build its portfolio, Dunkin’ would be an attractive candidate. With a market cap of $6.3 billion, Dunkin’ would be a much more expensive target than Costa.

Dunkin’ spokeswoman Michelle King declined to comment on the stock’s move, saying “We do not comment on rumor or speculation.”

Analysts said the timing might not be right for a deal, given that the company recently named David Hoffman to replace Nigel Travis as CEO. They say the board may wish to see what Hoffman can do with the company before agreeing to an acquisition.

“We assumed back in July when this move was finalized that Dunkin’ was planning on remaining independent, at least for a while,” Haskett wrote. “We aren’t in any rush to amend that thought, but Coke’s purchase does up the ante in the coffee wars and as we see it, Dunkin’ is now a strategic asset that JAB and Coke both may want.”

JAB has been steadily creating a coffee and breakfast empire over the last five years and Dunkin’ would fit well in the company’s portfolio. The privately held Luxembourg company is not a household name but its brands are. The company owns Keurig Green Mountain and Krispy Kreme Doughnuts, and it acquired Panera Bread in a deal valued at about $7.5 billion last year.

“I certainly get the sense that people have looked at it and done a lot of homework on Dunkin’,” said R.J. Hottovy, senior retail and restaurant analyst at Morningstar. “The Costa acquisition last week has people thinking about this again because deals are taking place in the space.”

McDonald’s has made an effort to improve its coffee menu, adding lattes, cold brew and frozen coffee drinks, while Burger King has tried to woo customers with $1 coffee deals. To fight back, Dunkin has been shifting to make itself known for more than just its donuts. The brand has tested changing its name to just “Dunkin'” to show that it is a beverage-led brand and coffee leader.

Dunkin’ shares are up more than 16 percent since January and more than 45 percent over the last year.

This entry was posted in Food & Beverage. Bookmark the permalink.