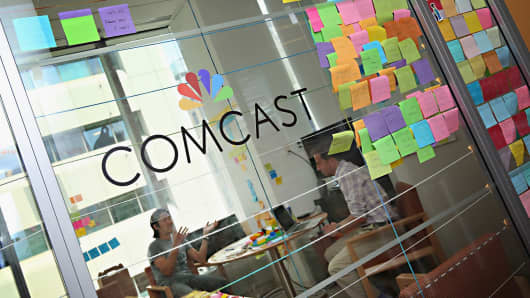 The media giant’s subscriber losses deepened during the third quarter, declining by 125,000, a key metric investors were watching. Matthew Strauss, executive vice president for Comcast’s Xfinity services, said on Sept. 7 that the company expected to report a loss of 100,000 to 150,000 video customers.

CEO Brian Roberts told CNBC’s “Squawk Box” after the report that this was Comcast’s 63rd-straight quarter of cash-flow growth.

“The cash flow of the company – which is, I think, the main metric that we judge ourselves – was up 5 percent across the company for the first nine months,” Roberts said. “Now a majority of that cash flow comes out of the broadband business.”

Roberts emphasized the performance of Universal Studios and NBC Universal this year, saying both businesses are humming.

“These are the best three quarters we’ve had at NBCUniversal since we bought the company,” Roberts said, before adding that “Universal may have the best cash-flow year in its 100-plus year history.”

He also said the NBC network has its biggest lead on any broadcaster in half a decade. The gap between first and second place is the widest its been in six years. “This is the fourth year in a row of NBC being in first,” Roberts said.

Strauss said the third quarter was the most competitive in recent history, adding that Hurricane Harvey was also to blame for the losses. That means a deepening of losses from the previous quarter, bringing Comcast’s total video customers to 22.4 million.

The company announced several “smart-home” offerings in Augustamid a push to diversify beyond its cable options. The company wants to offer more services in the home to increase revenues and create more loyal customers.

President Donald Trump tweeted about Comcast on Oct. 10, when he asked when “is it appropriate to challenge” the NBC network license. Trump’s tweet could raise fears of higher government scrutiny on Comcast, although networks are not licensed by any organization. The Federal Communications Commission requires licenses for individual radio and television stations.

Disclosure: Comcast is the owner of NBCUniversal, the parent company of CNBC and CNBC.com.

This entry was posted in Media. Bookmark the permalink.