Turkey’s currency takes a tumble amid diplomatic dispute with US

The Turkish lira dropped sharply on Monday after the U.S. Embassy in Ankara announced a suspension of visa services — a move Turkeyquickly matched.

Chris McGrath | Getty Images
Fake US Dollar and Turkish Lira currency often used as a novelty gift is seen for sale at a tobacco shop in a market on December 5, 2016 in Istanbul, Turkey.

The visa-service suspensions were “a tit for tat, if you like, reaction. That sparked concerns over the stability of the lira,” Rodrigo Catril, currency strategist at National Australia Bank, said on Monday. “Turkey has a huge current account deficit and therefore a huge need for funding.”

A country develops a current account deficit when the value of its imports exceeds its exports, leaving a deficit that usually must be financed by borrowing.

Turkey’s current account deficits averaged $4.75 billion a month for the last three months, the widest since 2013, according to data from Macquarie.

The decline came in the wake of rising tensions between the two NATO members.

On Sunday, the U.S. Embassy in the Turkish capital said on Twitter that “recent events” had forced Washington to reassess Ankara’s commitment to the security of the U.S. mission and its personnel. All non-immigrant visa services had been suspended “effective immediately,” the embassy added. 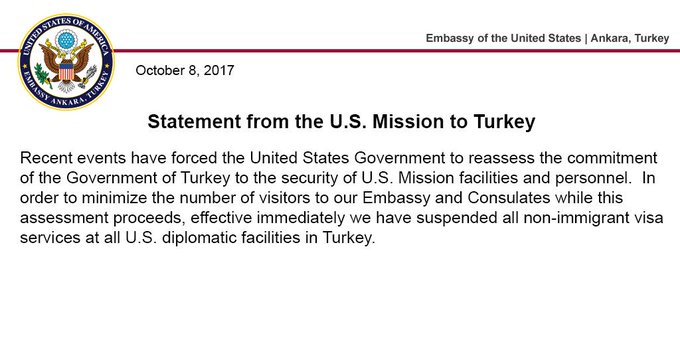 The U.S. has refused to extradite Gulen to Turkey, reportedly due to a lack of convincing evidence of his involvement in 2016’s failed coup. Gulen has previously denied involvement in the attempted putsch, which killed more than 230 and led to the arrest of more than 50,000.

Turkey’s embassy in Washington, D.C. quickly followed the footsteps of the U.S. and also suspended non-immigrant visa services in a similarly worded statement on Twitter. 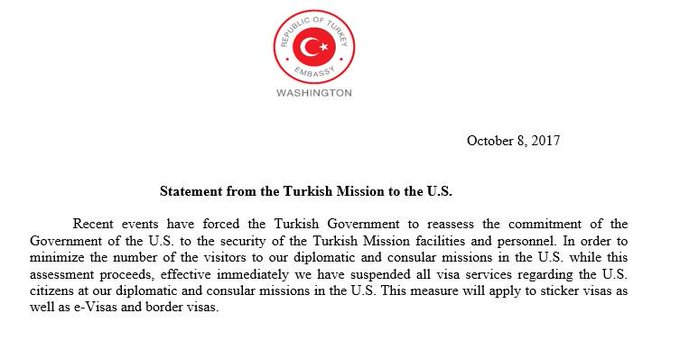 In addition to the political tensions, there were other reasons for the lira to come under pressure.

Turkey’s inflation rate rose over 11 percent on-year in September, according to data released earlier this month.

Macquarie said in a note on Monday that the central bank could raise interest rates to contain inflation and prop up the currency, but that would come at the expense of growth, which remained relatively weak compared with pre-coup levels.

The firm noted that Turkey’s central bank typically monitors the lira against a 50-50 basket of U.S. dollars and euros and that the basket was currently around a record high of 4.0425, compared with a post-coup range of 3.80 to 4.

This entry was posted in Currencies. Bookmark the permalink.