U.S. stocks closed lower on Tuesday after President Donald Trump warned North Korea, saying that threats will be “met with fire and fury.”

Trump made his remarks just hours after revelations Pyongyang has successfully created a miniaturized nuclear weapon designed to fit inside its missiles.

“The geopolitical tensions could be the catalyst for the market’s direction in the next coming weeks depending on how it all shakes out,” said Robert Pavlik, chief investment strategist at Boston Private. “If those talks keep escalating, the market will get nervous.”

“I think the muted reaction in the market has to do with Trump not necessarily following up on his tough talk,” Pavlik said. 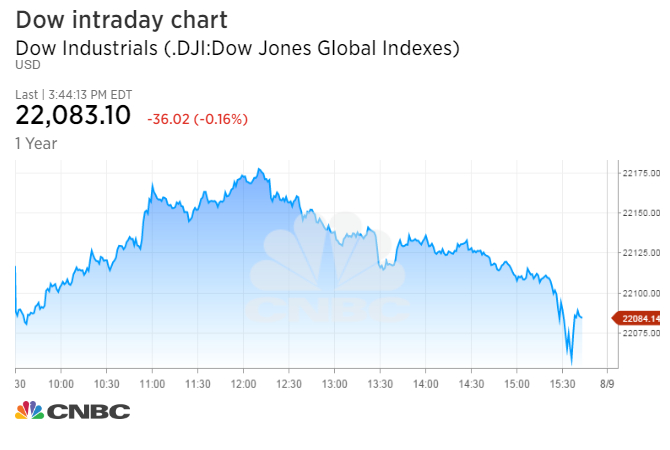 The CBOE Volatility Index (VIX), widely considered the best gauge of fear in the market, popped nearly 11 percent to 11.02.

The S&P 500 closed 0.24 percent lower at 2,474.92, with materials leading decliners. The index, along with the Dow, notched an intraday record earlier in the session. The S&P broke above its previous intraday high of 2,484.04, propelled by earlier gains in financials and tech.

Jeremy Klein, chief market strategist at FBN Securities, said financials received a boost from a rise in yields earlier in the session.

The benchmark 10-year yield jumped to trade at 2.28 percent after the jobs openings and labor turnover survey showed a record number of job openings for June.

Stocks were coming off a record setting session. The Dow had closed at a record high for nine straight sessions on the back of strong earnings. The S&P, meanwhile, notched its first record close since July 26 on Monday.

As of Friday, calendar second-quarter earnings have grown by 10.1 percent. S&P Capital IQ originally forecast earnings to grow by 6.2 percent.

Dow component Disney is set to report quarterly results Tuesday after the close. Investors will be looking for clues about the company’s cable business, especially ESPN.

Michael Kors and Ralph Lauren both posted better-than-expected earnings before the bell Tuesday, sending their stocks higher by 21.5 percent and 13.3 percent, respectively. Retail stocks have taken a hit this year, with the SPDR S&P Retail ETF dropping 6.2 percent in the period as investors fear further market gains from Amazon.com. 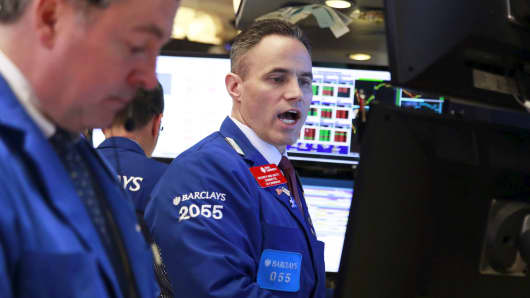 “It’s definitely a good start for retailers” this earnings season, said Nick Raich, CEO of The Earnings Scout. “Expectations were very low for retailers coming into the season.”

Overall, stocks have been on a tear this year, with the Dow, S&P and the Nasdaq composite all hitting record highs and surging more than 10 percent. But some market experts are worried that a pullback may be close.

“There’s sort of a vacuum” in the market right now, said Marc Chaikin, CEO of Chaikin Analytics. “We’re banging up against resistance and there’s a lot of people on vacation. In this type of environment, bad news tends to send the market lower.”

Roberto Friedlander, head of energy trading at Seaport Global Securities, said in a note Tuesday that Monday’s trading volume was the lowest since 2007, excluding holidays.

Another sign the market may be primed for a pullback is increasing selling of tech stocks. According to Bank of America Merrill Lynch, tech stocks saw their fourth straight week of outflows.

Tech has been the stalwart of the U.S. stock market this year, rising more than 20 percent in the time period.