When 33-year-old Hong Yuan of Beijing bought his first car earlier this year, the decision was easy.

“I always thought I would own a car when I was a kid, but I didn’t think about having an electric car because I didn’t know the technology would move so fast,” said Yuan.

His decision to buy an electric car was driven by two major factors: money and the ability to immediately get his car registered. 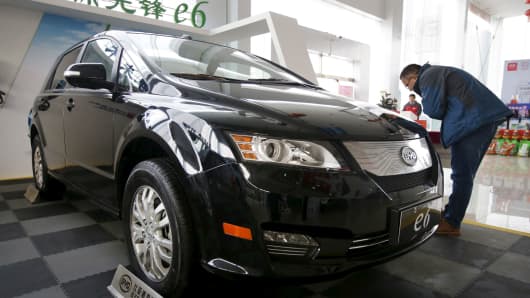 “First of all, of course, it’s the car plate policy,” said Yuan. “Second is the government and the city. They both provide subsidies to these new energy cars.”

The Chinese government wants to see more people drive EVs in the hope of cutting down on emission-related pollution — and government policies reflect that. In China’s biggest cities, getting a license plate for a new car means waiting weeks or months to win an auction or a lottery. However, those buying electric vehicles get their license plates right away.

These policies have boosted sales of electric cars to Chinese consumers to 188,000 last year, easily ahead of the U.S., where 116,000 were sold.

At the BYD plant in Shenzhen, that growth in demand can be seen on the assembly line. BYD sold 62,000 electric vehicles to Chinese consumers last year and plans to at least double that number this year.

BYD’s growth in electric cars comes after years of expanding from battery production into electric vehicles.

Berkshire Hathaway Chairman Warren Buffett liked the business so much that one of his conglomerates has a 10 percent stake in BYD.

While the Chinese government is pushing electric cars, analysts are wondering how quickly sales will grow given the challenges facing Chinese consumers who want an EV.

“Chinese consumers generally live in large apartment buildings, not in standalone homes where they can more easily have a charging solution,” said James Chao, with the consulting firm IHS Automotive. “One of the conundrums for the EV buyer here is ‘where do you charge it?'”

He sees the number of public charging stations in China growing along with the ability of consumers to charge electric cars at home.

“We don’t think it will be a problem,” said Shu. “We don’t have too much concern about infrastructure for the charging.”

Yuan plugs his e6 into a charging station in the parking garage under his apartment building.

“I think it’s pretty exciting because you don’t have to worry about the gas price anymore and the electricity price is always stable,” he said.

This entry was posted in Asia, Auto. Bookmark the permalink.