If you believe medical marijuana can help humans deal with pain, chemotherapy or anxiety, why not try it on pets?

Gi Gi Griffin is willing to try. The widowed real estate broker from the upscale Pacific Palisades area of Los Angeles looks like the last person you’d see walking into a pot dispensary in Hollywood. But she’s not here for herself. She’s here to buy cannabis for her 6-year-old Sheltie, Joy.

“I just knew I wanted to try whatever would help with my dog,” she said.

She’s part of the latest growth market for pot: Pets. 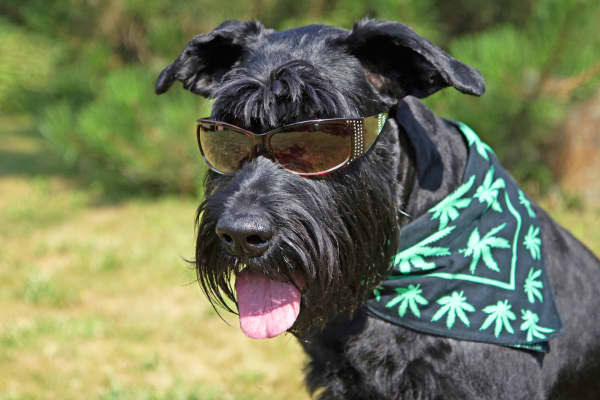 Joy was diagnosed with bladder cancer in January, and veterinary cancer specialists presented Griffin with a range of treatment options, from anti-inflammatory drugs to chemotherapy and radiation (“I was told it would be close to $7,000”).

Instead, she took the advice of a neighbor who had recovered from cancer surgery with the help of medical marijuana. “She suggested that I try something like that for Joy.” Griffin used her friend’s connections to get into a dispensary, and she is currently spending about $120 a month on various so-called cannabidiols, or CBDs, which she mixes into Joy’s food. “Look at her,” Griffin said, stroking the healthy-looking dog sitting beside her. “She eats well, she as a lot of energy, and I think she’s doing well.”

The ASPCA and PETA will not endorse medical cannabis for animals due to a lack of research, and veterinarians cannot prescribe it. Owners have to obtain it on their own, and it’s unclear how big the business is.

“I have said this is a multimillion dollar idea,” said Vaughn Hirschkorn of Eden’s Cure. He makes one of the products Griffin uses, Kannakrill. Hirschkorn is a long-time user of medical marijuana and caregiver. He decided to make a pet pot product after his son’s cat fell ill. “I said, ‘Here’s some CBD capsules, break them open and put them in the cat’s food.’ … Within a half hour the cat started eating again.” Hirschkorn said he uses “non-detectable” levels of THC in Kannakrill. “I don’t believe in getting pets high.”

However, Hirschkorn is not a veterinarian.

Dr. Tim Shu is. About a year ago he started VETCBD to sell low-THC medicines for pets. “We use it for pain, arthritis, anxiety, nausea and seizures, and they don’t get high from it,” he said. VETCBD sells in 70 medical marijuana dispensaries in California, costing $40 for a one-month supply. Shu will not disclose revenues, only saying that he has thousands of clients. “There’s some people that use it for horses, there’s some people that use it for small animals, like mice, guinea pigs, rabbits.” Dosage is based on a pet’s weight.

Clients include Debra Jantz, who already had a medical marijuana card. Her 10-year-old chocolate Lab, Tyler, has severe arthritis. “We’ve tried a lot of different things, and this really made a big difference,” she said of the VETCBD oil. “He started swimming again and running in the park again.”

Jake Snapinn works in a dispensary, and when his dog, Sunshine, started having seizures, he tried VETCBD. “She has not had a single seizure since I began dosing her.” What’s more, Sunshine’s finicky appetite has been replaced by the munchies. “She’s eating her whole meals.”

Shu is convinced “the sky’s the limit” for pet cannabis, given Americans’ love of animals. However, while all other aspects of the pet care industry grow, none has the regulatory hurdles facing cannabis. Marijuana remains a schedule 1 narcotic under federal law, making researchers reluctant to spend time and money investigating its effects on dogs and cats.

“I think that there needs to be more research done in a positive way, rather than research to prove a negative,” said Griffin. She isn’t convinced cannabis will save her dog, but she is hoping it has helped shrink the tumor. “I asked the cancer specialist in Los Angeles (about cannabis), and she said that if she could prescribe it, she would.”