World drowns in oil as producers slug it out

Oil prices continue to crater, and the bottom remains elusive because not one of the world’s three largest producers shows any sign of blinking.

The latest leg down for crude came with U.S. weekly inventory data Wednesday which showed a surprise supply build of 2.6 million barrels last week, while analysts had expected a drop. West Texas Intermediate futures plunged 4.3 percent to $40.80 per barrel, a new six-year low.

“What we tend to think is these low prices will be around in our forecast for a couple of quarters,” said Eric Lee, energy analyst at Citigroup. Analysts believe ultimately low prices should stop some of the production that is driving a supply glut, but that has not happened as quickly as experts had previously projected.

WTI oil futures look set to fall into the $30s per barrel, a low range that many analysts had previously not targeted. While Citigroup has been saying a drop into the $30s was possible, the latest revision to its official base case price outlook put WTI crude at an average $39 per barrel in the fourth quarter of this year and the first quarter of next year.

Oil analysts say forecasting the timing of a bottom in prices has been particularly difficult because of the unknowns around U.S. production, and most have now extended their forecasts for low oil well into next year.

But the two other producers in the top three are bigger, and they have each also had a significant impact on world supply, with no sign of abating.

Saudi Arabia, the world’s biggest exporter, has been able to use its low cost base to put even more oil onto the world market. And Russia‘s dramatically weakened currency turns into a positive at home, helping the largest crude producer to lower production costs for its own oil industry.

“Today’s prices haven’t yet turned into a shock for the global oil industry. Many people hoped that it would hit the U.S. shale industry first and foremost but it hasn’t happened so far,” said Vadim Yakovlev, first deputy chief at Gazprom Neft told Reuters. “That tells me that … the Saudis could try to test new levels of resilience.” Yakovlev said production at many projects can stay viable even at $25 to $30 a barrel.
Citigroup expects Russian production to grow steadily and sees it up by 100,000 barrels a day this year to about 11.1 million barrels a day. It expects Saudi Arabia to produce about 10.2 million barrels a day, after hitting a record high this spring. Citi analysts see Saudi production at just under the 10 million barrel a day level next year.

These and other smaller producers, who have been aggressively battling each other for market share in Asia, continue to add to the more than 1 million barrel a day world oil glut. That makes finding the market bottom difficult.

“It is tricky,” said Lee. “Fundamentally, it makes a lot of sense that the fourth quarter of this year looks particularly bad because refining demand drops and driving season drops off … if you get through the fourth quarter and you still have this oversupply, then maybe it’s the second quarter of next year when you have this drop off in demand again.” 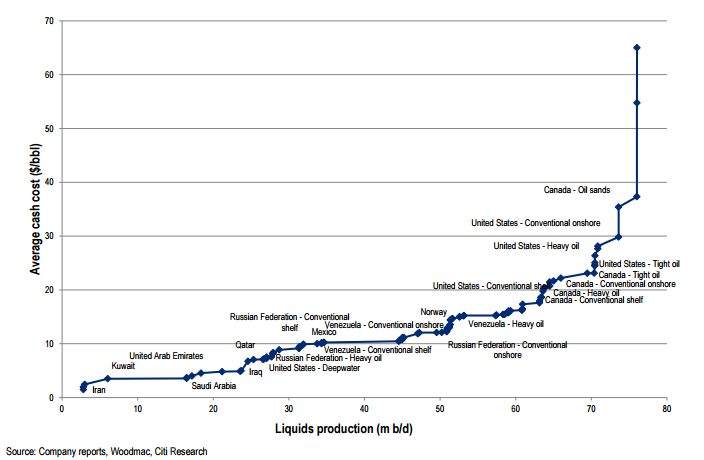 A number of oil analysts expect the next big drop, and possible bottom in prices, to come when the U.S. refining industry shuts down some capacity for maintenance between early September and early November. That industry has been processing about 17 million barrels a day, and refining maintenance would take 1 million to 1.5 million barrels off the run rate.

One surprising factor has been that U.S. shale producers have proven more agile with costs and technology than expected, and U.S. production is off its high but fairly steady at the 9.3 million barrel a day level, according to the latest EIA weekly data.

“That was one of the most surprising statistics this week,” said Andrew Lipow, president of Lipow Oil Associates. “The U.S. remains an outlet for countries trying to maintain their market share of crude oil sales.”

Citigroup and other firms have changed their price forecasts to show a more prolonged downturn in prices that could ultimately cause a shakeout among producers. Lee said the factors that affect producers include production costs, storage costs and financial flows.

The swift drop in prices makes the financing environment more dicey for exploration and production companies this fall. In October, banks are set to review the credit lines of companies in the oil patch, and they are expected to clamp down.

“We’re slowing down a little bit and a lot of investments have been canceled or postponed or delayed,” said Lipow. “It’s just going to take some time to soak up the oversupply situation as the market anticipates the return of Iranian oil.”

When it comes to costs of production, Russia and Saudi Arabia have a big advantage over the U.S. Saudi Arabia’s production is less than $10 a barrel, while Russia also has some production under $10, according to Citigroup.

U.S. shale producers, meanwhile, have varied costs depending on where they are located. Some of the high-cost production is already shut in, and Citigroup sees a cluster of production in the $30 per barrel area. Analysts and traders who took the CNBC Oil Survey last week were split on the break-even price for frackers, with 43 percent of the participants saying it was $45 to $55 per barrel.

While Russia and Saudi are lower-price producers, their economies are much more reliant on the contributions from oil.

“Their (Saudi Arabia’s) fiscal break-even price of oil is hard to measure exactly. Some people peg it at $80 or $90. That’s how much they need the price to be to balance their budget … so they need to cut back spending,” said Lee. “By raising production, they do grow their revenues and bring down their break-even price. … The other thing is they did not borrow and have massive borrowing power. … We do think they are trimming costs.”

Citigroup late last week revised down its forecast for oil prices, with a base case for $54 Brent this year. Citi analysts see $50 for Brent in the current quarter and $47 in the fourth quarter. They expect those price levels to stick through the first half of next year, with an average $53 per barrel Brent price for 2016.

For WTI, Citigroup expects the price this year and next year to be $48 per barrel, with the average third-quarter price $45 and the fourth-quarter price $39 per barrel. Citi gives a 55 percent probability to this base case.

Lee said Saudi Arabia is going head to head with other Mideast producers for share in Asia, where there is a 20 million to 25 million barrel a day oil deficit.

“A lot of the focus is on China. The Saudis are competing with the UAE, Iraq and Russia,” he said. Saudi Arabia lost its spot as top exporter to both China and India in the spring, and more recently in Japan, according to Citigroup.

For that reason, production may stay elevated as producers drive product into markets where they would like to build market share.

Lipow said one factor that could change things quickly would be an unanticipated geopolitical event that affects oil supply or threatens it.

“This is a type of market that has completely discounted any potential geopolitical risk,” he said. “You’re not even hearing anyone talking about that. The market is so beside itself in bearishness, that’s not even in the market’s thinking.”