Oil sinks to 15-month low below $48 on rising US, Russian output

Oil prices sank to a 15-month low on Tuesday as the United States and Russia continue to pump at record levels ahead of planned output cuts by OPEC and its allies.

From peak to trough, WTI has lost nearly 38 percent of its value since hitting a roughly four-year high in early October. The slump has brought WTI’s year-to-date losses to nearly 20 percent. 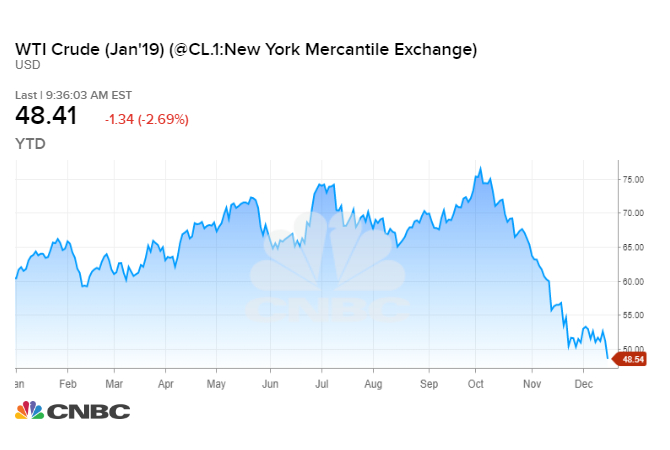 This month, oil output from U.S. shale fields is set to rise above 8 million barrels per day for the first time ever, the U.S. Energy Information Administration reported on Monday. Production from seven key regions is forecast to rise by another 134,000 bpd in January.

Meanwhile, sources tell Reuters Russia is pumping at 11.42 million bpd this month, a level that would mark an all-time high if confirmed.

Russia is the largest producer in an alliance of 10 oil-exporting countries that reached an agreement with OPEC to cut output earlier this month. The roughly two dozen producers began limiting their output last year in order to drain a global crude glut.

The alliance eased off those caps earlier this year, but now that crude stockpiles are once again on the rise, the producers are launching another round of supply cuts that aim to take 1.2 million barrels from the market

However, the cutbacks do not go into effect until January, and Russia has warned that it will only gradually taper off output.

“The market is not going to buy forward expectations of supply cuts. It’s not going to buy promises from China for policy stimulus. It needs to see real physical tightness,” he told CNBC’s “Power Lunch” on Monday.

Oil was also dragged lower by a tumble in U.S. stock markets on Monday. The Dow Jones Industrial Average and S&P 500 are now on pace for their worst performance since the great depression in 1931.

The weakness across assets is causing investors to question whether there is something “bigger and more sinister” happening in the global economy, according to Currie.

“We’re not just seeing it in oil and commodities. It’s happening across the asset space,” he said. “It’s very rare that you see stocks, bonds and commodities all down together.”

Oil future pared overnight losses on Tuesday as U.S. stocks rebounded at the start of trading.