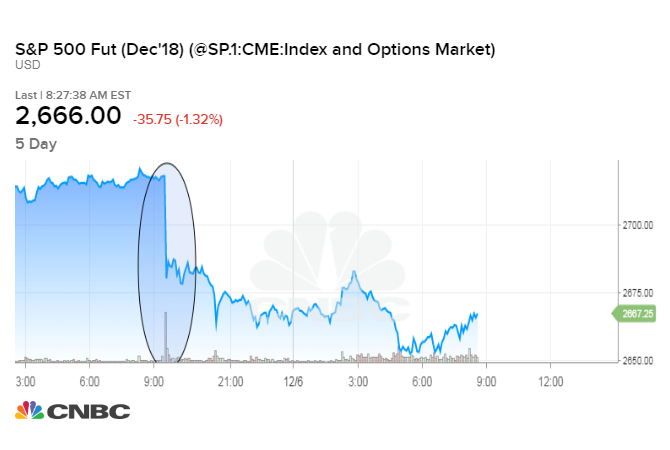 The stock market sell-off on Thursday began with a mysterious overnight plunge in equity futures that caused the CME Group to halt trading in several intervals.

When futures opened for trading at 6:00 p.m. ET on Wednesday, the eMini S&P 500 futures fell as low as 1.8 percent in a sudden move on above average volume.

The CME Group said it had to intervene with multiple 10-second pauses to prevent a steeper decline in the equity futures.

A CME Group spokesperson offered the following statement to CNBC:

“Our equity index futures and options markets paused intermittently following this evening’s open due to volatility, which triggered more than 40 Velocity Logic events in the first six minutes of trading. All markets operated as designed throughout.”

Speculation for the swell in volume and plunge in futures included the news of the arrest of the CFO of the Chinese telecom company Huawei. The arrest was made by the Canadian authorities on the extradition request by the U.S., a move that some worried could put trade negotiations between Beijing and Washington at risk.

“After we saw this Huawei news hit, it seemingly (and inordinately) contributed to an almost impossible 65 handle drop in Spooz (S&P futures) on the overnight reopen, with 36,700 contracts trading in the first 10 minutes,” said a note from the Nomura Securities trading desk.

But traders also speculated that the selling could be attributed to a large fund or funds liquidating a position.

Futures briefly recovered but then eventually fell back to near those lows as traders said the damage was already done.

The CME’s Velocity Logic is designed to detect market movements of a set numbers of ticks up or down in a predetermined amount of time and halt trading if necessary.

The S&P 500 fell 1.7 at the opening bell Thursday while the Dow dropped more than 450 points, bringing the index’s two-day losses to more than 1,000 points. The moves may also be linked to pent-up market jitters that accumulated when the major exchanges were closed on Wednesday for the funeral of President George H. W. Bush.

— With reporting by CNBC’s Michael Bloom.