Apple has some competition for the tech crown.

A steep sell-off in the tech giant has brought its market cap down to rival one-time leader Microsoft. If Microsoft continues to gain against Apple, it will surpass its market cap for the first time since mid-2010. It briefly did so in early trading Tuesday.

Apple and Amazon had been battling it out for the highest market capitalization, but the online retailer’s stock has dropped in the tech swoon that began in October. Its market cap was $773.27 billion as of Tuesday’s close.

“There are two industries that we’re really bullish on right now: cloud and gaming. And Microsoft is a huge player in both,” Tepper told CNBC’s “Trading Nation” on Tuesday.

Gaming, especially, could be a game changer for the tech company, says Tepper.

“I don’t think everyone realizes how real this industry is. There’s more people watching ‘League of Legends’ than the NBA Finals and the Olympics,” Tepper said. “To put that into perspective, the ‘League of Legends’ will sell out the Barclays Center for four-straight nights. The Nets can’t do it for one night.”

Tepper also faults Apple for failing to follow consumer trends and adapt its technology to suit.

“I used to think of Apple when someone mentioned innovation but the problem is they’ve forgotten how to innovate,” he said. “Their MacBooks still don’t have a touch screen option, and that’s probably to prevent the cannibalization of iPad sales but, to be honest, who does any real work on an iPad? I think that’s a huge miss.”

Frank Cappelleri, chief market technician at Instinet, sees Apple soon restoring its solid lead. He says its charts look so bad they could be good. 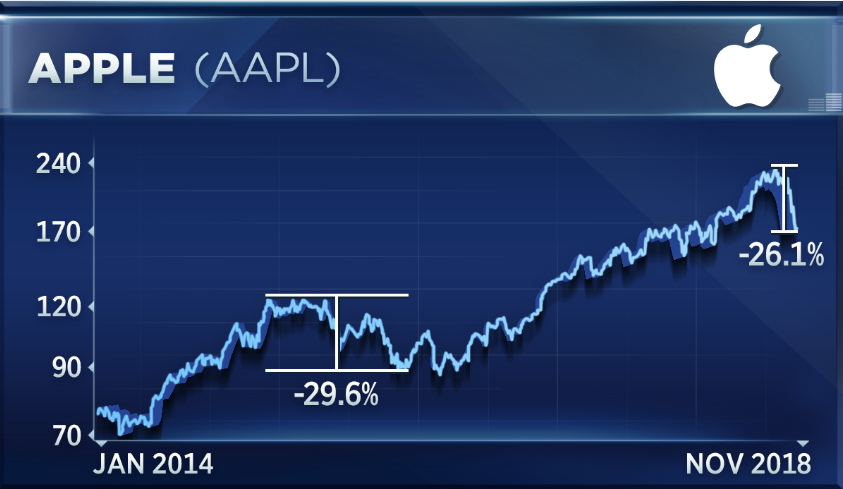 “Apple is down 26 percent from its high back in October. Annualized that comes out to 90 percent. We think that kind of pace is really unsustainable,” Cappelleri said on “Trading Nation” on Tuesday. “Apple is due for a near-term bounce here.”

The last time Apple saw a similar move was when it dropped nearly 30 percent over the 12 months to February 2016, says Cappelleri. From those lows to its recent October record, its stock surged 150 percent.

Cappelleri says Apple could soon bounce back up to its 200-day moving average at roughly $194. That represents an 11 percent rebound from Tuesday’s close.