Apple just entered a bear market, but it could be your best chance to buy

The bears have devoured the Apple trade this week.

Its stock tumbled into a bear market on Wednesday, territory marked by a decline of at least 20 percent from 52-week highs. Since its record high on Oct. 3, Apple has shed $213 billion in market cap. 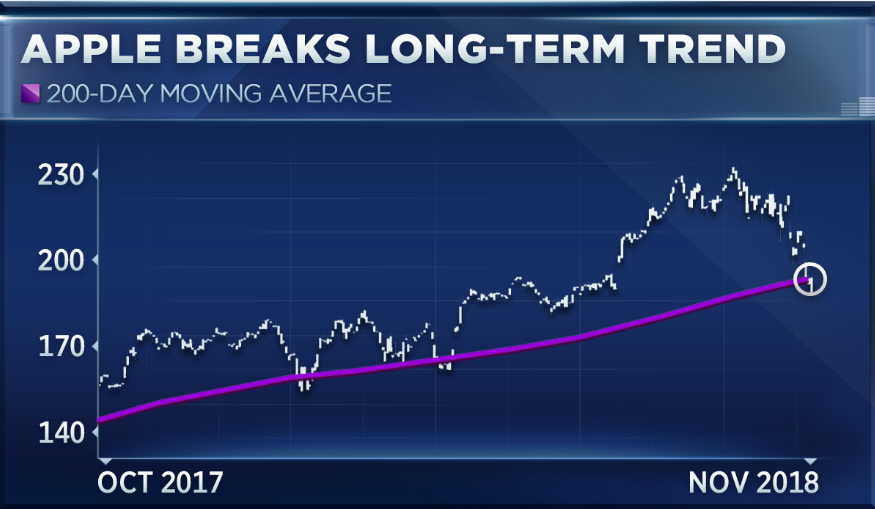 Those losses have also pushed it below the long-term trend line represented by its 200-day moving average.

“I’m actually not too concerned it’s below the 200-day moving average. Look back at February, look back at April. It was below there for six and seven sessions so I think it can pingpong around a little bit,” Baruch said Wednesday on CNBC’s “Trading Nation.”

Apple shares are now 3 percent below the 200-day moving average, a level it broke on Tuesday.

“I do see a tremendous amount of support down at $182,” Baruch said. “If we can get back above that 200-day moving average, remain constructive on that path, I think $204 to $207 could be in the cards here over the next month.”

A move back to $207, a level seen only a week ago, represents 10 percent upside. That rally would pull Apple shares out of a bear market. However, it would remain 11 percent lower than the record, keeping it in a correction.

“I think it’s at a big discount. This panic and craze is unjustified,” Bapis told “Trading Nation” on Wednesday.

Look at its year-to-date performance as an example, Bapis said. The stock has risen more than 10 percent in 2018, far better than the S&P 500’s gain of less than 2 percent.

“If we shift to fundamentals, millennials want it, teenagers want it, adults want it, and they’re all talking about the next iPhone, the next product, the next Apple experience,” added Bapis. “It’s trading at 14 times earnings with a small dividend yield and still dominating the market, we’re long this stock for the foreseeable future.”

Disclaimer
This entry was posted in Investing, Markets, Technology. Bookmark the permalink.