Corporate earnings have been on a tear that soon will end, and history suggests a rough road ahead for the stock market.

S&P 500 profits collectively are on pace to rise 25 percent for the third quarter, which would keep them in line with the results from the previous two reporting periods in 2018, according to CFRA and S&P Capital IQ. The fourth quarter is estimated to see a 17.5 percent increase. For the full year, that would mean earnings gains of some 17.5 percent for the large-cap index.

However, that looks to be end of double-digit gains for the near future. 2019 is expected to yield a 9.3 percent gain that, while still substantial, indicates a considerable slowdown as well.

To quantify, the bad news is that the current trend points to more market losses. Stovall estimates that the total current correction, which saw the S&P 500 down 9.4 percent at one point, could end up around the historical average for such periods of 14 percent.

The good news is that Stovall does not see an outright bear market, defined as a 20 percent drop, as is often the case with peak earnings. 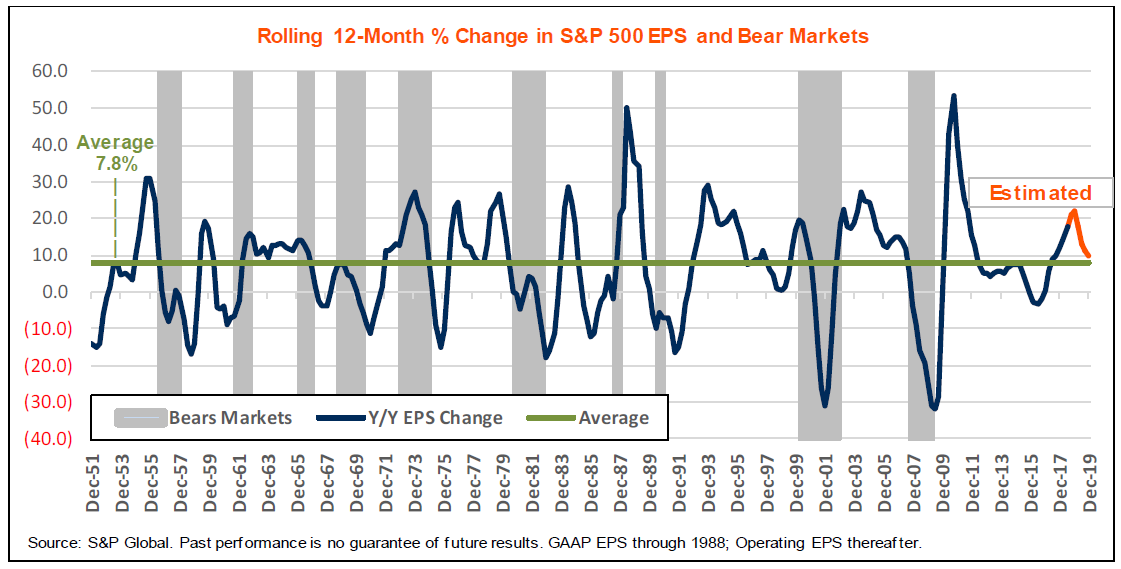 “Indeed, we think the recent unpleasantness represents the readjustment in the anticipated angle of ascent in share prices over the coming year, due to increasingly challenging year-on-year GDP and EPS comparisons,” he wrote.

Over the past 65 years, a majority of earnings peaks have been accompanied by bear markets or corrections. Earnings growth expectations next year that are half of those seen in 2018 would be consistent with a profit top.

Companies and analysts have been adjusting their sights about forward earnings due to a number of factors.

There are concerns about rising interest rates, a slowdown in growth due to fiscal stimulus wearing off, and the belief that the trade battle in which the U.S. has found itself with China and other partners could take a bigger chunk out of the economy than initially anticipated.

Nine of the 11 S&P 500 sectors cut their 2019 earnings forecasts, with tariffs cited by a number of companies as a pressure ahead. Most said they would try to offset rising input costs by passing price increases on to customers and consumers, according to a Goldman Sachs report.

“The markets are being driven by uncertainty and emotion. We think fair value for the 500 at the end of this year and next looks higher than recent prices would indicate,” said.

Stovall points to “a trio of turnaround triggers” that he thinks will help boost the market’s fortunes over the longer run, once the correction runs its course: a midterm election surprise in which the Republicans maintain control of the House and Senate; progress in the U.S.-China trade dispute, and the Federal Reserve backtracking on its intentions to continue raising interest rates.

“The markets might then be able to take full advantage of the historical post-election pop,” he said.