Apple’s stock was downgraded for a second time since its earnings report, this time by Rosenblatt Securities, which said it has lowered its expectations for iPhone production and shipments.

The firm cut its rating on the largest public company in the U.S. to neutral from buy, telling clients that it will be difficult for Apple to offset weaker volume with higher selling prices in the second half of 2019.

Apple also was downgraded by Bank of America Merrill Lynch on Friday.

Apple — which on Friday posted its fifth consecutive week of stock losses for the first time since 2012 — finished that day down 6.6 percent, its worst one-day move since January 2014. The company on Thursday evening reported iPhone sales that missed estimates, gave disappointing revenue guidance and said it would no longer report iPhone unit sales.

Apple’s stock fell 1.6 percent in premarket trading to around $204 per share following the second downgrade. 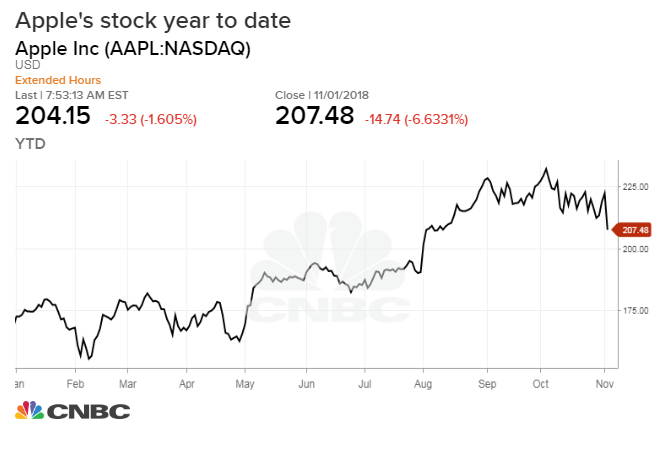 “We believe Apple’s slightly soft guidance reflects our recent view that Apple will reduce iPhone production (our estimates of a 6-million-unit production cut),” Zhang said. “The iPhone Max has been selling well and will most likely help increase average selling price and gross margin, but we believe it will be difficult for ASP to grow in the second half of calendar-2019.”

The Rosenblatt downgrade echoes that issued by Bank of America, with analyst Wamsi Mohan advising clients that slower growth in app store revenue, soft December-quarter guidance and weaker emerging market trends all expected to drag on the stock.