Stock market swings may have hit mortgage applications, down 2.5% 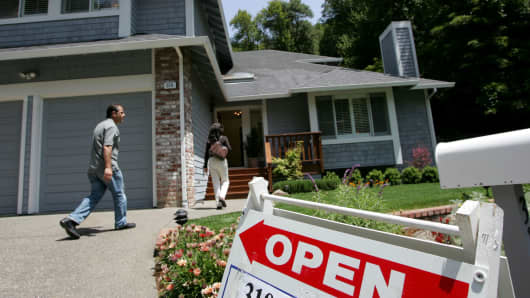 Mortgage lenders were less busy last week, even as interest rates held steady. Unlike rates, the stock market saw wide swings, mostly lower, and that may have spooked homebuyers.

Total mortgage application volume fell 2.5 percent last week compared with the previous week, according to the Mortgage Bankers Association’s seasonally adjusted index. Volume was 16 percent lower than a year ago, when mortgage rates were nearly a full percentage point lower.

Mortgage applications to purchase a home, which are less sensitive to weekly interest rate moves, fell 2 percent for the week and were 0.4 percent lower than the same week in 2017. That’s the first annual drop since August.

“Purchase applications may have been adversely impacted by the recent uptick in rates and the significant stock market volatility we have seen the past couple of weeks,” said Joel Kan, an MBA economist.

Home sales have been slowing for months, although there was a slight uptick in signed contracts to buy existing homes in September. That may have been buyers rushing in to make deals before interest rates rose further.

The average contract interest rate for 30-year fixed-rate mortgages with conforming loan balances ($453,100 or less) remained unchanged at 5.11 percent, with points decreasing to 0.50 from 0.52 (including the origination fee) for loans with 20 percent down payments.

The adjustable-rate mortgage share rose to 7.6 percent of all applications, highest since May 2017. That was driven more by a decrease in fixed-term applications than it was an increase in the total number of ARM applications, however. Borrowers often opt for ARMs because they offer a lower interest rate and can be fixed for at least 10 years.

Mortgage rates have moved slightly higher this week as bond markets weaken further. There will likely be more volatility late in the week, as several events could impact the bond market; mortgage rates loosely follow the yield on the 10-year Treasury.

“Rates are at risk of bouncing higher more noticeably unless they get some serious help,” wrote Matthew Graham, chief operating officer of Mortgage News Daily. “That help would either need to come from surprisingly weak economic data, an even bigger downturn in stocks, or an unexpected headline that implies big economic risks.”