S&P 500 dips into correction territory, then rebounds in yet another wild day on Wall Street

Stocks recovered most of a steep decline on Friday in another volatile session on Wall Street.

The Dow Jones Industrial Average traded 119 points after dropping more than 500 points at its lows of the day. The Nasdaq Compositewas down less than 1 percent. At its lows, the tech-heavy Nasdaq had fallen more than 3 percent.

The S&P 500 fell as much as 2.2 percent and briefly dipped into correction territory, trading more than 10 percent below its 52-week high. The average stock market correction, since WWII, results in a 13 percent drop and lasts for four months if it does not turn into a full-fledged bear market. 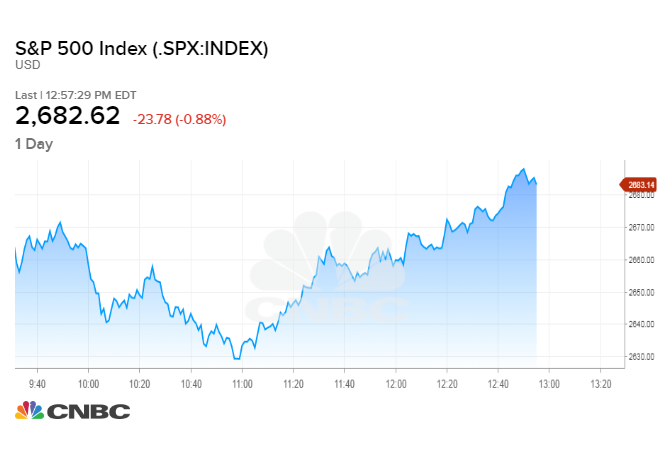 Despite the S&P 500’s intraday recovery six of the 11 S&P 500 sectors were still down at least 10 percent from their 52-week highs, including energy, materials and financials. Around three quarters of the index’s stocks are also in a correction.

“The 19.7 percent correction in 2011 is as close to a bear market as we’ve had in recent years. I don’t think we’ll close to that, but I think we’re heading for a deeper correction than the one we had in January and early February,” said Sam Stovall, chief investment strategist at CFRA Research. He noted investors are realizing that earnings growth will slow down moving forward, thus they are pricing this in.

Among the driving forces for the market’s sharp drop earlier in the day were disappointing earnings from key tech companies that overshadowed strong economic data.

Amazon fell 6.5 percent after the company released its latest quarterly results on Thursday. Alphabet shares, meanwhile, dropped as much as 5.6 percent before trading 1 percent higher. Earnings for both companies topped analyst estimates, but revenues fell short.

There were “high expectations” for this earnings season, King Lip, chief strategist at Baker Avenue Asset Management, told CNBC. “The earnings are not coming in as great as people had suspected,” Lip said, adding that “for Amazon specifically, forward guidance was surprisingly light.”

These declines were enough to offset a better-than-expected report on U.S. economic growth. The Commerce Department reported the U.S. economy grew at a 3.5 percent rate in the third quarter, above a 3.4 percent estimate. The government also said its personal consumption expenditures (PCE) index, a key measure of inflation, increased by 1.6 percent last quarter.

Stock have suffered in recent weeks as fears of rising inflation — and rising interest rates — trim corporate profit expectations. Since the PCE index is the Federal Reserve‘s preferred inflation gauge, any sign that the measure may be slowing could stall the central bank in its plan to continue to increase the overnight rate.

Consumer spending, which accounts for more than two-thirds of economic activity, surged by 4 percent in the third quarter, the fastest pace since the fourth quarter of 2014.

“The GDP number really solidified some of the points that have been made for the fourth quarter,” said Minh Trang, senior FX trader at Silicon Valley Bank. “The Fed is still on track for another rate hike” even though the inflation numbers were a bit weaker than expected.

Friday’s decline comes after equities rallied in the previous session. The major averages are also set to post big losses for the week. The S&P 500 and Dow are down 2.2 percent and 1.8 percent this week, respectively, entering Friday’s session.

These losses also add to a sharp drop seen throughout this month. Through Thursday’s close, the Dow and S&P 500 were down 5.6 percent and 7.2 percent for October, respectively. The Nasdaq, meanwhile, had lost 9.1 percent.

“What’s happened is we have a number of outside issues overshadowing what has been strong economic data and overall good earnings,” said Michael Arone, chief investment strategist at State Street Global Advisors.

Several factors have conspired to knock markets down this month — some earnings disappointment, fear of rising interest rates, a brewing conflict between Italy and the European Union over budget spending, criticism of oil power Saudi Arabia after the killing of a dissident journalist and finally, worries that world growth is losing steam.