Luke Sharrett | Bloomberg | Getty Images
Contractors work on the wood framing for a house under construction in the Norton Commons subdivision of Louisville, Kentucky, U.S., on Friday, July 29, 2016.

Homebuilding stocks are getting crushed as they take a direct hit from the rising interest rates rattling financial markets this month.

The iShares Home Construction exchange-traded fund, which includes homebuilding products and homebuilders, is down 27 percent since January. The SPDR S&P Homebuilder ETF is down 21 percent, also in a bear market. Both funds have fallen more than 3 percent in September. 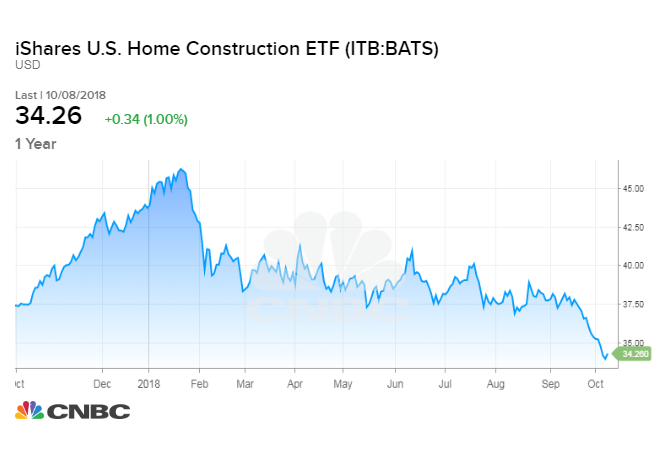 The sector has become viewed as undesirable with the 30-year mortgage rate hitting the crucial 5 percent level. In addition, the 10-year Treasury yield rose to a new seven-year high on Tuesday. The U.S. bond market was closed Monday for Columbus Day.

“It already is affecting housing. Every basis point rate rise already is affecting housing. The run-up in rates over the past year is now weighing increasingly heavily on single-family housing demand, particularly since housing prices have risen so much,” said Mark Zandi, chief economist at Moody’s Analytics. “Affordability is now an issue for many potential home owners. Home sales have gone sideways since the beginning of the year and house price growth is now slowing in many markets so it’s already doing damage. Some of the weakening is due to the tax effect in markets where the deduction was critical.”

Those areas include California, New York, Connecticut and New Jersey.

But most economists including Zandi so far do not see a major slowing in the housing market and do not expect it to have a big impact on the economy, even if consumers lose some of their appetite for real estate, particularly at the high end. Analysts also say some of the negative action in homebuilders and related stocks may be overdone.

“I think fundamentals are strong out there, but I think buyers are going to continue to be involved in the market particularly at the low end,” said Susan Maklari, homebuilder and building products analyst at Credit Suisse. “That will come into play in the builder stocks but we obviously think the upside is not what it was before. … We see the potential for upside but less than we did before.”

“One of the things you probably could see is a seasonal kind of bounce back that happens as investors start to think about 2019, and the spring selling season that comes in early February. There probably could be a sense that even with the 10-year at 3.27 and 30-year mortgages at 4.7, these companies are going to deliver pretty decent growth rates,” Maklari said.

Ben Herzon, economist at Macroeconomic Advisers, said while some home price gains have slowed, he does not expect a major slowdown in housing. “There are other factors, in addition to rates that affect housing — how well income is doing, whether people have jobs. Rates is just one of the factors. In our forecast, the outlook is for continued improvement in the housing market, at least for the next couple of years,” he said.

Existing home sales for August were unchanged, at a rate of 5.34 million units. That follows four straight months of declines. Some analysts blame the slowdown on a lack of properties for sale.

Economists said rising mortgage rates, which are influenced by the move higher in the 10-year Treasury, may have already chilled some activity. “I think it affects the pace of housing starts and the pace of household formation,” Herzon said. “When rates rise, people might respond by purchasing homes that aren’t as expensive.”

Maklari said the high end of the housing market shows more signs of slowing than the low end. “This isn’t a one-quarter trend. You’re seeing states in the southern parts of the U.S. are gaining jobs, gaining population. States that are higher cost are generally are losing population and job growth is less,” she said.

Maklari notes that homebuilder Lennar, when it released earnings recently, said it saw orders in Texas rise 20 percent, but the company talked about a slowing in California. She pointed out that Lennar is still expected to see sales growth of 7 to 10 percent, while D.R. Horton’s annual growth is expected at 10 to 15 percent.

The Credit Suisse analyst raised earnings estimates for Lennar to $5.58 per share from $5.40 for fiscal 2018 but cut her price target to $55 per share over the next 12 months.

“It was at $65. We adjusted it because you are seeing this multiple compression that’s coming across the group even as earnings get revised upward,” she said. She rates Lennar, PulteGroup and D.R. Horton as outperform and others in the group, as neutral.

But there are concerns that margins on builders and suppliers will be impacted due to higher rates dragging on prices and by higher labor and materials costs for builders because of tariffs on goods from China and elsewhere.

J.P. Morgan is also overweight Lennar but its analysts reduced earnings forecasts for fiscal 2019 and 2020 based on its reduced gross margin estimates. However, they see upside due to its merger with CalAtlantic Group.

Maklari said many home products companies have been able to pass on higher costs, a trend that should continue. “Some of these companies, a lot of the suppliers, have been raising prices. Builders have been passing that along, and that will continue to be their strategy. Labor has been rising, too, and that’s probably going to continue. That’s a part of the construction costs and as a whole they’ve put that through,” she said. Maklari said rising wages are both a plus and minus since higher wages may cost a builder more but that means buyers are better equipped to pay.