These stocks should be booming during this historic bull market, but instead some are down 40%

These should be flush times for the big asset-management firms.

Stock markets are at a record high, strong demand for bond investments eagerly absorbs record debt issuance, and household net worth has never been higher.

What better companies to invest in during a record-setting bull market and corporate-bond boom than those whose product itself is, in effect, the stock and bond markets?

One would think. And yet, in one of Wall Street’s starkest divergences, the shares of asset managers have been trampled during this year’s bull run. A selection of 10 large publicly traded asset-manager stocks — including Invesco, BlackRock, Franklin Resources, T. Rowe Price and Legg Mason — are off an average of more than 25 percent from their 52-week highs.

Valuations have become compressed, with just about all the names sitting at a discount to the broad market and with the stocks’ forward price-to-earnings ratios sitting anywhere from 10 percent to 40 percent below their respective five-year average. 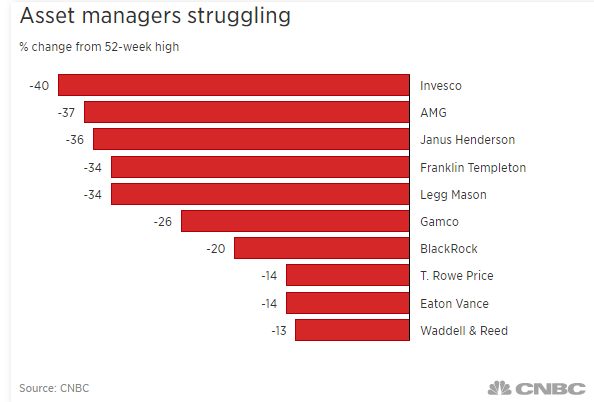 Behind the sour sentiment is a set of broad, powerful trends for which the traditional managers have no easy answer: Low-cost index funds are dominating the collection of new cash from investors over the active strategies these managers specialize in.

Clients increasingly rely on high-tech gatekeepers — whether financial supermarkets such as Schwab or software-driven “roboadvisors” — that funnel cash into ETFs, not on human brokers with strong active-manager relationships. And active managers are underperforming their benchmarks this year at even a higher rate than usual, hurting the outlook for a revival of interest in stock-picking funds.

In short, the market seems to view asset management as a chronically disrupted industry.

Robert Lee, who covers the sector for Keefe Bruyette & Woods, said: “At the end of the day, what investors see is an industry facing significant organic-growth headwinds.” With the shift to passive funds, there is “unrelenting fee pressure” and aggregate net fund flows that are “zero to slightly negative,” he said.

A final point: With the economic expansion reaching the nine-year mark and U.S. stock indexes more than tripling in value over that time, Lee says investors are asking, “Do you [want to] own market-sensitive stocks at this point in the cycle?”

More broadly, today’s market is enraptured of huge, global “winner-take-most” technology platforms positioned to capture more than their share of the digitally connected future, and has no time for what it deems their victims.

Sure, mall retailers’ stocks have had a nice comeback, but they suffer from stingy valuations compared with any other time of low unemployment and strong industry sales. The traditional auto companies, likewise, are valued as if perhaps we are past the peak of what could prove the last auto cycle that they will enjoy. Ditto with Old Media giants — despite the fact that they are working to adapt to new distribution modes and still have healthy cash flows.

For asset managers, investors don’t even have the benefit of access to playing all the innovation and growth leaders. Privately held Vanguard Group — which added more assets last year than the rest of the industry combined — is setting the pace on low-cost index products. And family-held Fidelity is close behind, recently going to some zero-fee index funds for existing customers. It’s as if a retail investor had no ability to own Amazon or Walmart, only the rest.

Sure, BlackRock, State Street and Invesco are three of the five largest ETF issuers. But they each have greater reliance on other product areas and so don’t get the full benefit from Wall Street of a leadership position in a growing area.

Is there a chance that the market is too harsh in relegating the asset-management stocks to the “terminal decline” bargain bin?

Lee points out that there are signs the market is winnowing the group into relative winners — with stronger franchises and scale — and losers. BlackRock, T. Rowe, Eaton Vance enjoy greater “investor confidence in their ability to generate growth” over the longer term, he says.

As for smaller, narrower players, there’s always the chance that another round of industry consolidation could sweep some up. But how aggressive are buyers likely to be, given the well-known structural headwinds?

If nothing else, the fact that huge secular shifts are weighing on this sector might be of some consolation to the typical investors, if it means the lousy performance of this one time-bellwether group isn’t signaling trouble for the broader market.