Marijuana stocks ripped higher Thursday after the U.S. Drug Enforcement Administration classified a cannabidiol-based drug made by GW Pharmaceuticals in its least restrictive category, setting the stage for commercial launch.

Epidiolex, the new GW Pharmaceuticals drug, uses cannabidiol, or CBD, to help with the treatment of seizures stemming from two rare and severe forms of epilepsy.

This announcement “renders the launch set-up fairly straightforward for GW into a market where there is significant unmet medical need and very high pent up awareness/demand,” wrote Stifel analyst Paul Mattela.

“We continue to recommend the stock on the basis that we believe the Epidiolex launch can exceed first year expectations,” the analyst added. 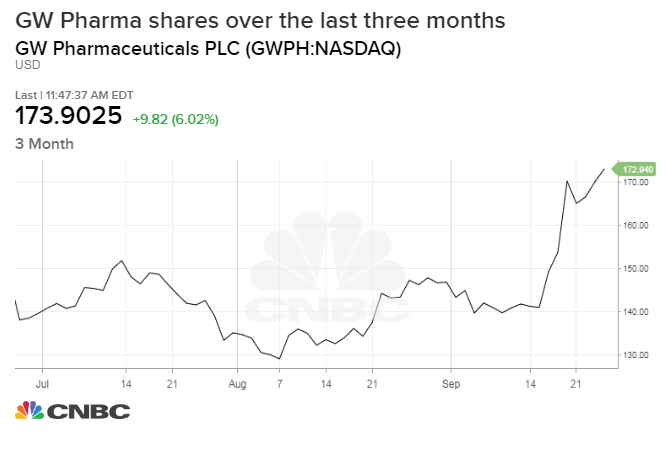 News of the mild DEA classification comes amid growing fascination on Wall Street over a handful of companies engaged in the cultivation and production of cannabis products for either medical or nonmedical purposes.

Other stocks in the limelight include pharmaceutical companies, including GW Pharmaceuticals, that produce and market drugs that use cannabinoids.

Tilray, for example, enthralled Wall Street last week after posting its best day ever following approval from the Drug Enforcement Administration to import pot to the United States for medical research.

Given the excitement around what appears to be an amenable DEA, Tilray shares have swung wildly over the last 10 days as investors are pinned between interest in a stake in the burgeoning industry and fears of an asset bubble.

Though both Aurora Cannabis and Canopy Growth — two other marijuana plays — traded lower Thursday, both stocks have endured similar frenzy over the last few weeks.

Aurora has rallied 35 percent this month in Canadian trading after Canadian news service BNN Bloomberg reported Coca-Cola is in talks with Aurora to develop weed-infused beverages.