Brent crude breached $81 a barrel on Monday — its highest level in nearly four years — on the back of a tightening oil market and OPECleaders signaling they won’t be immediately boosting output. 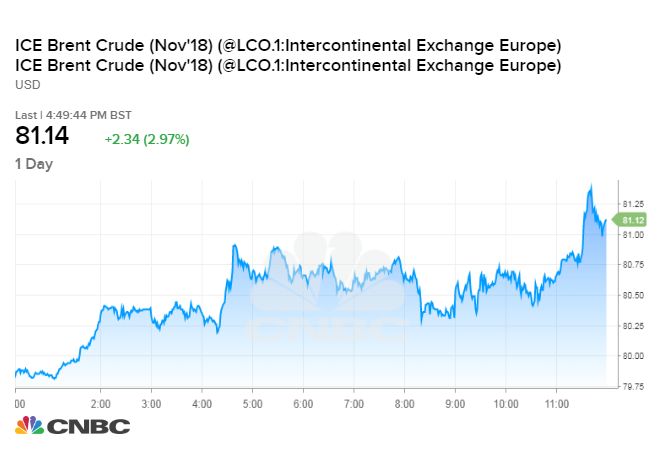 Brent first hit a new four-year high in early morning trade. Oil prices extended gains at midday, increasing the odds of a breakout, according to some analysts.

“If we get a close over $80 that’s going to be very bullish. From there then you could see a greater push higher, really to $83 or $85,” said John Kilduff, founding partner at energy hedge fund Again Capital. “That should engender follow-through buying.”

J.P. Morgan wrote in its latest market outlook that “a spike to $90 per barrel is likely” in the coming months thanks to U.S. sanctions on Iranian oil exports, which have fallen dramatically in recent months as importers brace for the impending penalties. The bank forecasts Brent and U.S. benchmark WTI prices to average $85 and $76 per barrel, respectively, in the next six months.

A meeting of OPEC and non-OPEC oil ministers in Algiers over the weekend concluded with the 15-nation cartel and its allies refraining from an urgent boost in output, despite President Donald Trump’s demands that it work harder to bring down prices. The ministers said they would increase output only in the event that customers wanted more cargoes.

“Price risks remain skewed to the upside in the run-up to looming U.S. sanctions on Iranian oil exports. This outlook has been cemented by inaction on the part of OPEC+ over the weekend, which has in effect green-lighted a forthcoming supply squeeze,” he told CNBC.

The analyst sees the current bout of upward buying pressures persisting through to the end of the year, but warned that the outlook for 2019 was a different story.

“The oil balance in the early part of 2019 makes very bad reading for oil bulls with a sizable supply surplus penciled in by the leading energy agencies,” he said. “This will inevitably take the steam out of the current upswing in oil prices.”

The impact of U.S. sanctions on Iran’s oil sector will be deeper than what many have expected, said Peter Kiernan, Lead Energy Analyst at the Economist Intelligence Unit.

“Should cuts to Iranian oil exports end up being quite severe, OPEC will find it difficult to pick up the tab completely,” he told CNBC. “OPEC insists that the market is still ‘well supplied,’ but the pressure to relax output will heighten if prices continue to rise, adding an interesting dimension to the Trump administration’s efforts to try to isolate Iran by denying it crucial oil revenue.”

The Trump administration has been pressuring its allies to cut their Iranian oil imports down to zero since its decision to withdraw from the Iranian nuclear deal in May. South Korea has dropped its imports to nearly zero, but Japan and Turkey have had little marked decrease in theirs. India’s imports from Iran in August were actually up 56 percent from the same month last year, due to large discounts offered by the Islamic Republic since the sanctions were announced. A number of Asian countries, major customers of Tehran, have asked for waivers from Washington’s restrictions.

Iran’s oil exports averaged 2.1 million barrels per day (bpd) over the last year, and analysts say sanctions will likely take between 500,000 and 1 million bpd off the market.

A group of about a dozen oil producers led by OPEC has aimed to keep 1.8 million barrels a day off the market since January 2017 in order to drain a global glut of oil that caused a punishing downturn. In June, the participating countries agreed to restore some production after the group’s output fell more than intended.

OPEC and Russia have pledged to increase production to meet any shortfall created by an anticipated fall in Iranian crude oil production, but no official decision has been made yet.

Oil ministers at the weekend’s summit in Algiers stressed the strength of their supply in order to convey their ability to stabilize the markets in the face of shortfalls.

“Member countries over the last three months since June have responded in a very good way and have opened the taps and provided a lot of supply to offset decreases in Iran, decreases in Venezuela, decreases in Mexico, and markets are quite balanced today,” Saudi oil minister Khalid Al-Falih told CNBC on Sunday. “There is plenty of supply to meet any customer that needs it.”

Indeed, the International Energy Agency’s (IEA) latest oil reportnoted that global oil supply hit a record high in August of 100 million bpd, even amid collapsing output from Venezuela and looming sanctions on Iran, which is OPEC’s third-largest producer.

But the IAE’s findings emphasized the tightening market, noting that a disruption in any major producer could lead to a material impact on prices. “We are entering a very crucial period for the oil market,” the report stressed.