CEO Brendan Kennedy told CNBC’s Jim Cramer on Tuesday that the world’s largest pharmaceutical companies must start thinking about partnering with cannabis producers as a “hedge” against the space.

Kennedy argued that the same can be said for food and beverage companies. Aurora Cannabis has rallied nearly 30 percent this week in Canadian trading after Canadian news service BNN Bloomberg reported Coca-Cola is in talks with Aurora to develop weed-infused beverages.

The uptick in GW Pharmaceuticals stock followed a note from Morgan Stanley, which predicted that the company’s new cannabinoid-based therapy will be “blockbuster.” Analyst David Lebowitz reiterated his overweight rating on shares and his call for 24 percent upside over the next year.

Quickly becoming one of Wall Street’s most-followed stocks of 2018, Tilray posted its second-best day ever since its initial public offering on Tuesday after announcing approval from the Drug Enforcement Administration to import pot to the United States for medical research.

The company’s U.S.-listed shares jumped 29 percent in the prior session with 19 million of the company’s 21.7 million floating shares exchanging hands.

Tilray said Tuesday that it will work with the University of California San Diego Center for Medicinal Cannabis Research to study the safety, tolerability and efficacy of marijuana for a neurological disorder. 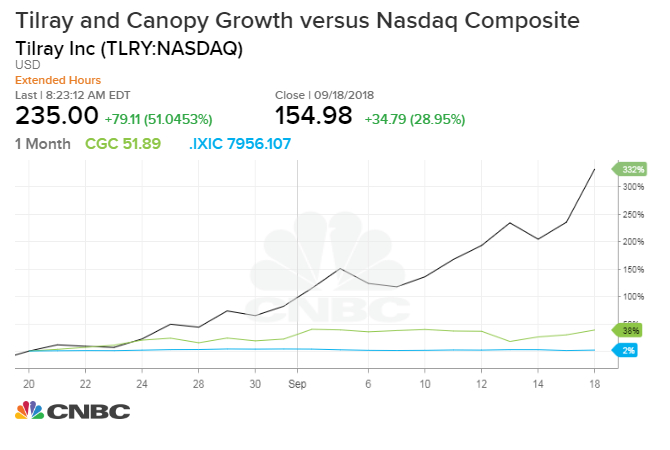 “Clinical trials build a halo around the brand. They inspire confidence and trust with physicians and regulators around the world and they give us data and information to talk to pharmacists and physicians that they just can’t obtain from our competitors,” Kennedy said.

Tilray’s market cap, despite the company posting $9.7 million in revenue as of last quarter, is larger than more than one-quarter of the S&P 500.

For reference, the company’s valuation exceeds that of Chipotle and E-Trade.