Majority of Americans approve of Trump’s handling of the economy for the first time: CNBC survey 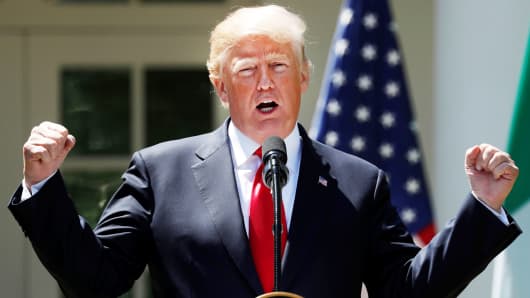 For the first time since President Donald Trump took office, the CNBC All-America Economic Survey shows more than half the public approving his handling of the economy, and it appears to be having some impact on his overall job approval rating.

The president’s economic approval rating surged 6 points to 51 percent with just 36 percent of the public disapproving, a 6 point drop from the March Survey.

His overall approving rating rose 2 points to 41 percent from the first quarter survey, but the percentage of Americans who disapprove dropped 10 points to 47 percent, the lowest recorded by CNBC during his presidency. Trump’s approval rating remains negative, at minus 6, but it’s also the lowest negative rating recorded since he took office.

The survey suggests that the recent controversy over the president’s decision to separate children from their parents at the border has had little effect either way.

The poll of 800 adults nationwide, with a margin of error of plus or minus 3.5 percentage points, was conducted June 16 thru 19 while the controversy over the separation of children from their parents dominated the news. But any impact on the president’s approval rating is difficult to find in the data. A comparison of the polling conducted Saturday and Sunday with Monday and Tuesday, when the story was more prominent, shows little difference despite considerable public outrage.

“People are so locked in to their partisan views that it’s really hard to move those approval numbers,’’ said Micah Roberts with Public Opinion Strategies, the Republican pollster for CNBC. “The most consistent thing about his presidency is how much people who love him, love him and how much the people who hate him, hate him.”

The poll does show that a 51 percent majority of Americans disagree with the president’s immigration policies, but the level is unchanged from last quarter and last year. It is the worst issue for the president among the issues polled by CNBC.

The rise in the president’s economic approval comes with growth running about a percentage point higher than it did during the Obama presidency, with unemployment near a 20-year low and amid what is believed to be a very strong quarter for growth. That has translated into positive views by the public on the economy that are reaching new records for the survey.

The president’s economic approval numbers come with some support from Democrats, said Jay Campbell with Hart Research Associates, the Democratic pollster for the survey. “There is component of Democratic base that’s willing to acknowledge the improving economy and willing to give Trump a certain amount of credit for it,’’ Campbell said. “A large number still disapprove of Trump on the economy but 30 percent of Democrats is not nothing.”

However, there remains a 10-point gap among those who approve of Trump’s handling of the economy and his overall approval rating. That gap exists even among conservative Republicans, who give the president a 96 percent approval rating on the economy but 85 percent overall. One of the biggest gaps is among nonwhites: 39 percent approve of his economic stewardship, but just 23 percent give his overall presidency a thumbs up.

On specific policies, the president’s biggest winners are tax cuts for individuals and businesses and renegotiating trade deals. His biggest losers: immigration, repealing Obamacare and reducing regulations on banks. A strong 58 percent majority also support his negotiations with North Korea. A plurality of 45 percent approve of Trump’s imposition of tariff’s, with 38 percent disapproving.

What’s it mean for midterms?

One problem for the president: Just 34 percent of Americans say they have seen an increase in their take-home pay because of the tax cuts, roughly the same as when the question was asked in March. And just a quarter of the public give Trump direct credit for the improvement in the economy. Still, that far outpaces congressional Republicans at just 3 percent and former President Barack Obama at 6 percent.

Asked whether controlling Congress would make the country better off, Republicans had a slight edge of 34 percent to 32 percent over Democrats, but 34 percent said neither or don’t know.

On the stock market, 42 percent said now is a good time to invest in stocks, 4 points below last year’s average when stocks surged but still above the long-run average. Roughly a third were unsure, which is the highest yet recorded, and 27 percent said it’s a bad time to invest.

The increase in gas prices, now averaging $2.85 a gallon, according to AAA, has had only a modest impact on driving habits with only 28 percent saying they are driving less now. But in 2007, when CNBC last asked the question, 55 percent said they were driving less with a national prices average of $3.10 a gallon.