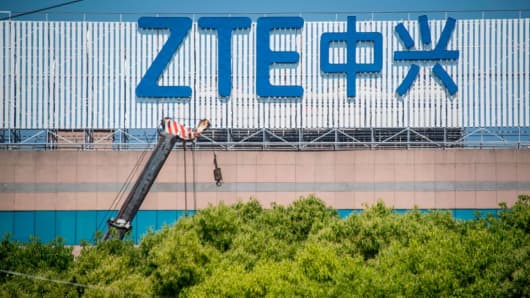 Johannes Eisele | AFP | Getty Images
A logo of Chinese telecommunications company ZTE is seen on an office building in Shanghai, China, on May 3, 2018.

Shares of ZTE sank on Tuesday after the U.S. Senate passed a defense bill that had major implications for an agreement struck with the Chinese telecommunications equipment maker.

ZTE stock tumbled 23.66 percent in Hong Kong by 3:25 p.m. HK/SIN while the company’s Shenzhen-listed shares were limit down 10 percent.

The sharp falls came after the U.S. Senate passed a $716 billion military funding bill, called the National Defense Authorization Act, on Monday. The bill contained an amendment that would sink a deal struck with ZTE that would allow the company to resume doing business with U.S. companies if the Chinese company adhered to a number of conditions.

That agreement had been made after the Shenzhen-based company’s operations took a hit earlier this year when the U.S. government stopped American companies from selling to ZTE, based on its dealings with Iran and North Korea.

The U.S. Senate’s version of the bill will need to be reconciled with the one passed by the House of Representatives last month. The latter version does not include a ZTE provision, Reuters said.

ZTE stock had just returned to trade last week after being halted since April. Shares of the company had dropped some 40 percent in Hong Kong when trade resumed last Wednesday.

Tuesday’s declines also came amid renewed investor concerns over an escalation in trade tensions between China and the U.S. after U.S. President Donald Trump threatened new tariffs on $200 billion in Chinese goods.

This entry was posted in Markets, Politics and Government. Bookmark the permalink.