800,000 people are about to flee New York and California because of taxes, say economists 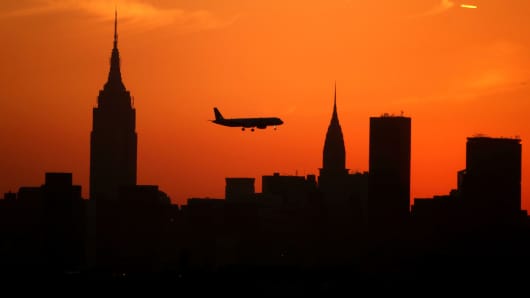 Conservative economists Arthur Laffer and Stephen Moore are predicting a new mass exodus of wealth from New York and California because of the new tax law. But academics who have studied taxes and migration call the forecast “pure nonsense.”

In an op-ed in the Wall Street Journal headlined “So Long, California. Sayonara, New York,” Laffer and Moore (who have both advised President Donald Trump) say the new tax bill will cause a net 800,000 people to move out of California and New York over the next three years.

The tax changes limit the deduction of state and local taxes to $10,000, so many high-earning taxpayers in high-tax states will actually face a tax increase under the new tax code.

Laffer and Moore say that the effective income-tax rate (what people actually pay) for high earners in California will jump from 8.5 percent to 13 percent. Wealthy Manhattanites would face a similar increase, they say. Those who make $10 million or more will see a potential tax hike of 50 percent or more, according to their analysis.

Those hikes, they say, will cause an exodus of residents to move to lower or no-income tax states.

“In years to come, millions of people, thousands of businesses and tens of billions of dollars of net income will flee high-tax blue states for low-tax red states,” they said. They say 800,000 people will move from California and New York over the next three years. Connecticut, New Jersey and Minnesota will lose a combined 500,000 people over the same period.

Yet economist and sociologist Cristobal Young of Stanford, who co-authored the leading study on wealth and tax migration, calls the forecast “pure nonsense.”

He said that California, New York and New Jersey have been high-tax states for decades and they still have the highest per capita concentration of rich people in the country.

“There is no correlation between the top tax state tax rate and the number (or rate) of millionaires in a state,” he said. He added that the people most affected by tax rates are the “late-career working rich” and they are less likely to move because they are “embedded in place for a host of social and economic reasons,” from the location of their companies and jobs to their social lives, charitable boards and customers.

Moore and Laffer say that 3.5 million Americans on net have moved from the highest-tax states to the lowest-tax ones. They add that high earners are the ones who have cost the states the most by leaving. Yet they fail to mention that very few of those 3.5 million were high earners.

What’s more, the number of millionaires in those high-tax states is actually growing, not shrinking.

That’s not to say that rich people haven’t left these states. They have. High-profile emigres like David Tepper leaving New Jersey for Florida give outsized publicity to the moves. Yet the high-tax states are also creating the most wealth — and more new millionaires than the number who are leaving. What’s more, it’s unclear that taxes are the chief reason for people moving from the Northeast to Florida.

And despite Moore and Laffer’s claim that it’s the wealthy who the most tax-sensitive and are leaving in greater numbers, the lower-earners are moving more – usually because of jobs or the costs of housing.

Young’s study, done with Charles Varner of Stanford University, and Ithai Lurie and Richard Prisinzano of the U.S. Department of Treasury, analyzed 13 years of income data for all Americans earning $1 million or more and they found that only 2.4 percent of million-dollar earners move every year. That rate is lower than the 2.9 percent move rate for the broader population. They found that only 0.04 percent of millionaire earners move for tax reasons.

So yes, many millionaires will move because of the tax changes. But if history is any guide, the high-tax states will likely continue to create more wealth than they lose.

This entry was posted in Real Estate, Taxes. Bookmark the permalink.