Stocks fell on Tuesday, giving up earlier gains, as investors were left disappointed with the latest batch of earnings while interest rates jumped to levels not seen in years.

The Dow Jones industrial average traded 318 points lower as of 12:37 p.m. ET, with 3M as the worst-performing stock in the index. The S&P 500 fell 0.8 percent, with consumer staples and technology sliding. The Nasdaq composite declined 1.5 percent.

Before the bell, 3M reported quarterly earnings that met analyst expectations, but the stock dropped about 8 percent after the company lowered its full-year profit forecast. Alphabet, meanwhile, topped bottom-line estimates but its stock declined more than 3 percent.

“Investors have high expectations for earnings,” said Kate Warne, investment strategist at Edward Jones. “At the same time, a lot of people are asking: Does it get better from here?”

“I think that’s why we’re seeing such shifts in the market,” Warne said.

Nick Raich, CEO of The Earnings Scout said he is still positive on the earnings season, however. 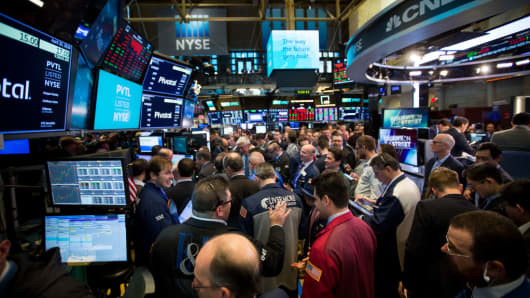 “While there have been some disappointments, they are in the minority,” said Raich in a note. “We are recording the best growth in any quarter since 2010.”

Corporate earnings this season have mostly outperformed analyst expectations thus far. Of the S&P 500 companies that have reported as of Tuesday morning, 83 percent have posted better-than-forecast earnings, according to FactSet.

Meanwhile, investors also kept an eye on the bond market, with the 10-year note yield trading at highest level since January 2014. The yield broke above 3 percent, a key psychological level, for the first time in more than four years.

Investors have been selling Treasurys this month — pushing yields higher — amid expectations of rising inflation, which could prompt the Federal Reserve to tighten monetary policy at a faster pace.