Tech helped lead the move higher, with Facebook jumping 2.7 percent and gains of more than 1.5 percent in Netflix and Amazon.

Facebook‘s move came after CEO Mark Zuckerberg told reporters he has not seen a noticeable change in user behavior in the wake of the Cambridge Analytica data scandal. 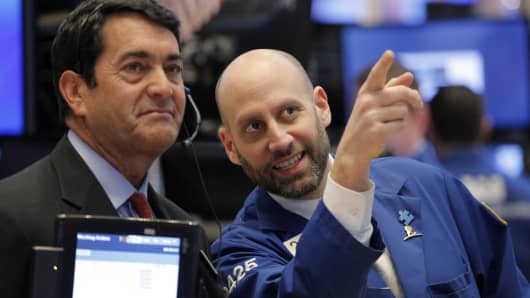 Chipmaker Advanced Micro Devices also rose 2.6 percent after Stifel upgraded them to a buy from hold.

The moves Thursday come after a wild trading day on Wall Street on Wednesday. The Dow Jones industrial average closed up over 200 points, rallying more than 700 points from its session low. The S&P 500 and Nasdaq erased losses to finish on a positive note as well.

“This is a market for seasoned and experienced investors,” said Alicia Levine, head of global investment strategy at BNY Mellon Investment Management. “We have some serious policy issues that are at the forefront.”

“It’s going to be a rocky market moving forward, but that doesn’t mean there’s something rotten at the core of it,” Levine said.

Markets have been on edge in recent sessions amid concerns of a potential trade war between China and the U.S. On Wednesday, China announced fresh tariffs on 106 U.S. products, including cars, whiskey and soybeans — less than 24 hours after the U.S. administration issued a list of Chinese imports that it would target.

The news initially sent stocks lower before bouncing back as the Trump administration tried to play down trade-war worries.

Investors have to come to terms that “market choppiness is here to stay,” said Wasif Latif, vice president of equity investments at USAA. “The market is transitioning [away] from an environment with low volatility. We were in an environment where any bad news would be shrugged off.”

The dollar dropped against the yen on Wednesday before recovering as investors bid up traditional safe-haven assets. On Thursday, the U.S. currency traded 0.7 percent higher against the yen.

Minh Trang, senior FX trader at Silicon Valley Bank, said he expects volatility to continue if trade tensions between China and the U.S. escalate. “If more action follows rhetoric, more traders will be spooked,” he said.

In economic news, weekly jobless claims totaled 242,000, more than the expected 225,000. Still, claims remained near their lowest levels since the 1970s.

Wall Street also looked ahead to Friday’s jobs report. Economists polled by Reuters expect the U.S. economy to have added 198,000 jobs in March.

“All of us expect it to be strong,” said Jason Thomas, chief economist at AssetMark. “Every indication suggests the report is going to be strong. The question for the market is: Where do we go from here.”