The first week in February usually marks the start of the busy spring housing market, but you wouldn’t know that from the mortgage market.

Total mortgage application volume barely moved last week, up just 0.7 percent on a seasonally adjusted basis from one week earlier, according to the Mortgage Bankers Association. Volume was 5 percent higher than the same week a year ago.

Applications to refinance a home loan, which usually fall when rates rise, eked out a 1 percent gain for the week and were nearly 2 percent higher than a year ago, when interest rates were lower. Some borrowers may have jumped to get the last low rates now, fearing even higher ones coming soon.

The refinance share of mortgage activity decreased to 46.4 percent of total applications, its lowest level since July, from 47.8 percent the previous week. Refinance volume hasn’t moved much in the last several months, signaling it may have hit a floor.

The average contract interest rate for 30-year fixed-rate mortgages with conforming loan balances ($453,100 or less) increased to its highest level since April 2014, 4.50 percent, from 4.41 percent, with points increasing to 0.57 from 0.56 (including the origination fee) for 80 percent loan-to-value ratio loans. 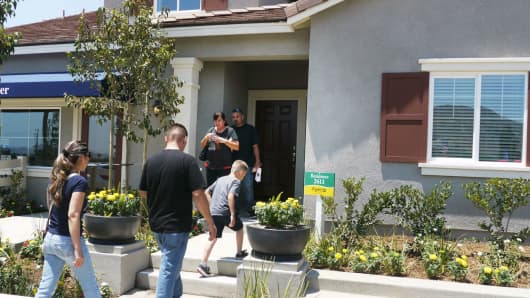 “While the stock market leapt into the New Year with strong gains, only to give it all back over the past few days, interest rates have generally moved higher, with the 10-year Treasury and 30-year mortgage rates about 30 basis points higher than where we started at the beginning of January,” said Mike Fratantoni, MBA’s chief economist. “A strong job market, accelerating wage growth, and expectations of faster rate hikes from the Fed all have played roles in pushing up longer-term rates.”

Mortgage applications to purchase a home were unchanged for the week, despite strong showings at open houses in neighborhoods across the nation. Buyers are out in force, but home prices are high and there is record low supply of homes for sale in most major markets. Purchase applications were 8 percent higher that a year ago, a sign of increased demand even amid the low supply.

Mortgage rates pulled back slightly at the start of this week, after the wild freefall in the stock market sent investors back to the bond market. Mortgage rates loosely follow the yield on the 10-year Treasury. That yield was moving higher again Tuesday, when the stock market swung back to the positive. Volatility will likely be the rule with yet another possibile government shutdown looming.