Hyperloop One outlines European routes ahead of test run 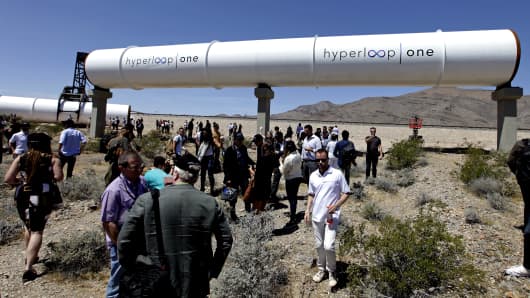 John Gurzinski | AFP | Getty Images
A Hyperloop tube is displayed during the first test of the propulsion system at the Hyperloop One Test and Safety site on May 11, 2016 in Las Vegas, Nevada.

Hyperloop One executives expect Europeans and even some people in Northern Africa are prime candidates to travel through a tube at close to 700 miles per hour.

In Amsterdam Tuesday, the transportation start-up unveiled nine European routes it could eventually develop for the hyperloop.

“Our vision is to, one day, connect all of Europe with our Hyperloop One system, networking the entire continent,” said Shervin Pishevar, co-founder and executive chairman of Hyperloop One.

The proposed routes are semi-finalists in Hyperloop One’s global challenge to identify cities and regions that would benefit from being connected by a hyperloop. The proposals for Europe connect over 75 million people in 44 cities, spanning 5,000 kilometers.

One route would circle around Germany, linking Berlin, Hamburg, Frankfurt and Munich. Others would stretch across the U.K. from London to Glasgow, Scotland. In addition, a hyperloop run could go from Madrid, Spain, to Tangier, Morocco.

“We’ve seen a lot of interest here, and we look forward to creating a partnership to enhance the continent’s transport infrastructure,” said Rob Lloyd, Chief Executive Officer of Hyperloop One.

Earlier this spring, Hyperloop One revealed 11 possible routes in the U.S. for its futuristic transportation system.

While Hyperloop One has garnered plenty of attention around the world, it has yet to show how the technology will perform at full scale. The company has built a 500-kilometer test run north of Las Vegas, Nevada, and is promising to have its “Kitty Hawk” moment this summer or fall where it shows how pods will move through a tube at near-supersonic speeds.

The idea of a hyperloop was first proposed by Tesla and SpaceX CEO Elon Musk four years ago. Musk envisioned a tube where magnetically levitated pods carrying people or cargo would be propelled through vacuum tubes at ultra-high speeds.

This entry was posted in Transportation. Bookmark the permalink.