Weak pay growth is posing a big headache for the Fed

If the Fed is feeling any inflation pressure, it certainly isn’t coming from the labor market.

A closely watched gauge of what’s happening with worker salaries showed only muted progress as 2016 came to a close.

Compensation costs for the private sector rose just 0.5 percent for the final quarter of the year, which didn’t even match the relatively muted Wall Street expectations of 0.6 percent, according to employment cost index data the Bureau of Labor Statistics released Tuesday.

For the full year, the increase translated to just 2.2 percent, a shade ahead of the 2 percent growth rate from the previous year.

Moreover, much of the fuel for the compensation increase came from benefit costs, which rose 2.1 percent during the year, owing largely to a 2.7 percent surge in health care benefit expenses.

“The latest data suggest that inflation might even be slowing rather than rising, indicating that there is no reason whatsoever for the Fed to weaken the labor market and slow job growth with further rate hikes,” the Center for Economic Policy and Research said in a post on the group’s site. “In other words, the Fed is shooting at phantom inflation.” 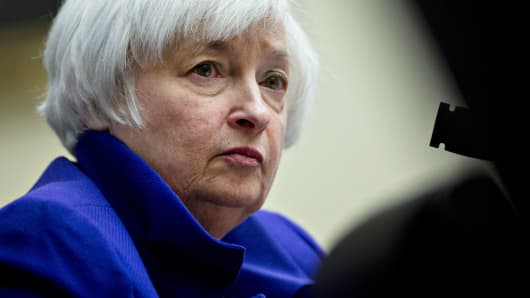 The ECI, along with the monthly Job Openings and Labor Turnover Survey, is thought to be one of Fed Chair Janet Yellen‘s favorite measures of slack in the labor market. Yellen and her central bank cohorts have said they are convinced that inflation is moving toward their 2 percent goal, but hitting that level on a sustained basis has proved troublesome for the slow-moving U.S. economy.

The news comes as the Fed begins its regularly scheduled two-day meeting Tuesday. The policy-making Federal Open Market Committee is not expected to approve a rate increase at the meeting, but it could tip its hand about how current developments will impact its actions ahead.

Since President Donald Trump‘s election victory in November, expectations on Wall Street have increased that the economy could grow at a more rapid pace than the current 1.6 percent post-recession rate. That’s due to Trump’s promise to cut taxes and regulations and increase domestic spending on infrastructure.

“Wage growth in the aggregate remains only decent,” Peter Boockvar, chief market analyst at The Lindsey Group, said in a note. “We continue to wait for the wage/salary acceleration and the hope is that it comes when friendlier fiscal policy kicks in, and a pick up in economic growth results.”

Fed officials have indicated that three interest rate hikes are in the cards for this year, after approving just one increase in each of the past two years.

However, the Fed backed off its intended path in 2016 after growth disappointed and a series of geopolitical events caused unrest in the financial markets. FOMC members initially had projected four hikes in 2016 before settling on just one, passed in December.

Fed-watchers continue to doubt whether the central bank will have the economic ammunition it needs this year to follow through on its rate normalization forecast.

“While the movement of benchmark interest rates may suggest heightened inflation fears, and justifiably so given the statements from President Trump, KBRA remains far more concerned about the level of demand in the U.S. and a surging dollar,” Whalen wrote.

Gains in the U.S. currency have spurred worries that it could slow growth. The Fed could be forced to shift course if it tightens into an economy that is still stumbling along, Whalen said.

“So far then, markets are operating on the assumption that we are in a rising interest rate environment,” he said. “KBRA believes that this assumption deserves some skepticism.”

This entry was posted in Federal Reserve. Bookmark the permalink.