Americans may have opted for change in the White House, but in statehouses across the country, politicians and bureaucrats are trying to figure out how to manage the most drastic presidential transition in recent history.

“Uncertainty is part and parcel of every transition,” said John Hicks, executive director of the National Association of State Budget Officers, “but I would say this one is a bit different because of the scope and the scale of some of the things being discussed are larger than we’ve seen in recent years.”

Hicks says 47 states are working on their budgets for the fiscal year that begins in mid-2017 (Kentucky, Virginia and Wyoming are in the middle of two-year budget cycles).

About all they can do is to base their budgets on current federal policies, with the knowledge that they will have to make adjustments soon.

In the state with the largest budget, California, Democratic Gov. Jerry Brown on Tuesday unveiled a hold-the-line $122.5 billion proposal that he called the most difficult budget in years. He warned of a potential $2 billion shortfall that could worsen, depending on what comes out of Washington.

“There are too many uncertainties that could put a massive hole in our budget expectations, so that’s just another argument to be prudent,” he told reporters.

The biggest uncertainty is the future of health care, with President-elect Donald Trump and congressional Republican leaders promising a quick repeal of the Affordable Care Act, but offering no clear picture of what will replace it.

California is one of 31 states that expanded its Medicaid program under the law, taking advantage of more than $19 billion in federal aid for the expansion in the current fiscal year. Without those funds, the state will face tough decisions about the 6 million people who gained coverage under the expansion.

They include 29-year-old Charis Hill of Sacramento, who has a rare inflammatory disorder that affects her spine. Before the expansion of Medicaid, she said, she had to rely on charity to cover expensive infusions of the drug Remicade, which she requires every eight weeks.

“I’m terrified,” she said. “These infusions and any type of insurance keeps me alive, and if I lose my coverage, I feel like I’m threatened to get all of my coverage through hospital emergency rooms, and that is not how to manage a chronic disease.”

Even some Republican governors —including John Kasich of Ohio and Rick Snyder of Michigan, both of whom approved Medicaid expansions in their states — are urging caution when it comes to repeal. But Hicks says every state is on edge.

Among the changes under consideration is to replace the program with block grants to the states, allowing more flexibility, but likely reducing the amount of aid.

Health care is not the only source of uncertainty. States are already dealing with slowing or declining tax revenues as the national recovery loses steam.

In California, the slowdown is modest, but Brown says it’s a warning sign.

“The tendency, the inevitable move is that when we’re toward the end of a recovery, we have all this money and people want to spend. That’s the very time when you have to pull in and provide a budget reserve,” he said.

Hicks says roughly half the states are projecting lower revenues. Several have already made mid-year budget adjustments. He says federal tax reform promised by Trump and the Republican Congress would add even more wrinkles.

In fact, he says, even the anticipation of lower marginal tax rates could play havoc with revenues next year.

“It’s possible that individuals have already deferred some of their capital gains and other non-wage income to calendar year 2017 to potentially take advantage of lower tax rates during that period,” he said. “If that’s the case, states are going to find out this spring when final returns are filed with state personal income taxes to where they may be lower than estimates.” 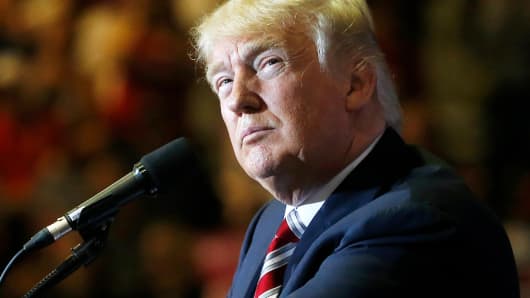 States are also worried about a change in the tax status of municipal bonds, Hicks says. If, for example, Congress tried to offset the impact of income tax cuts by ending tax-free treatment of municipal bonds, states could lose crucial borrowing power.

“States want to at least communicate with Washington that the tax exemption has a wide slate of benefits to state governments and the citizens in states because it lowers the price of borrowing for when you have to borrow to finance infrastructure,” he said.

At the same time, states are likely salivating at the prospect of a major federal infrastructure, a top priority of Trump.

“That is something on a positive note that states are interested in becoming partners with the federal government on,” Hicks said.