Mortgage interest rates came down slightly to end the year, but not enough to end the bleeding in the home-loan market.

Mortgage application volume plunged 12 percent for last week, seasonally adjusted, from two weeks earlier. The Mortgage Bankers Association did not report weekly volume last week but did include an adjustment for the Christmas holiday. 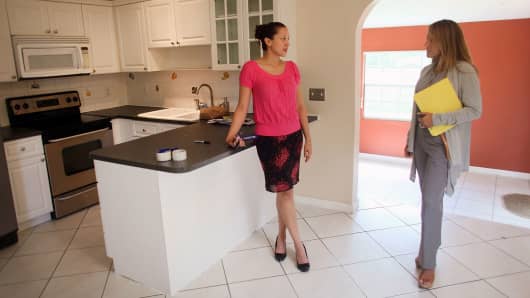 Getty Images
A real estate agent shows a home for sale to a prospective buyer in Miami.

Higher rates have hit the mortgage refinance business particularly hard. Applications to refinance a home loan fell 22 percent, seasonally adjusted, during the two-week period. They dropped by more than half in the last four weeks and ended the year 13 percent lower compared to a year ago. Mortgage rates rose sharply following the presidential election of Donald Trump and have hovered near two-year highs ever since.

The average contract interest rate for 30-year fixed-rate mortgages with conforming loan balances ($417,000 or less) decreased to 4.39 percent from 4.45 percent, with points increasing to 0.43 from 0.39 (including the origination fee) for 80 percent loan-to-value ratio loans.

Mortgage applications to purchase a home have also taken a hit from higher rates, though less severely. They fell 2 percent during the two-week period and ended the year 1 percent lower on the year.

“The composition of application activity continued to shift away from refinance towards purchase,” Fratantoni said. The refinance share of applications was around 52 percent over the last two weeks, the lowest level since July 2015.”

While the cost of financing a home has gone up in the past six weeks, the cost of the home itself has been increasing as well. Home prices in November were 7.1 percent higher than in November 2015, according to CoreLogic. The gains keep growing, crossing the 7 percent line for the first time in over 2½ years.

“Last summer’s very low mortgage rates sparked demand, and with for-sale inventories low, the result has been a pickup in home-price growth,” said Frank Nothaft, chief economist for CoreLogic. “With mortgage rates higher today and expected to rise even further in 2017, our national Home Price Index is expected to slow to 4.7 percent year over year by November 2017.”

Affordability is weakening overall, but it is particularly so for the largest segment of potential homebuyers, millennials. These first-time buyers have largely been sidelined from the housing recovery; just as they were beginning to enter the market last fall, they were hit by higher rates