American election stress is sky-high, but there are ways to regain your sanity 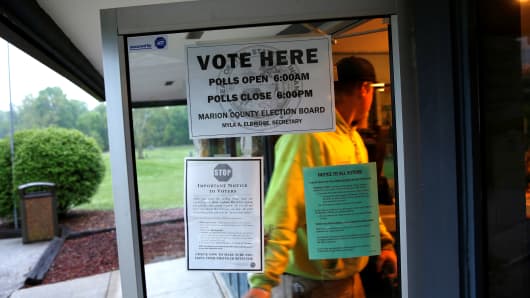 No matter which candidate wins the election this year, there is already at least one clear loser: Americans’ sanity.

A full 52 percent of adults say the election is very or somewhat stressful to them, according to a recent poll from the American Psychological Association. To help soothe these frazzled nerves, a handful of businesses are rolling out timely promotions and public relations stunts.

In Boston, the Hotel Commonwealth is offering a package to help guests disconnect from the noise. The property will block every television news channel and remove any election coverage from the daily newspaper.

Meanwhile, the Four Seasons in Washington, D.C., which is just over a mile from the future residence of either Hillary Clinton or Donald Trump, is offering two election-themed services.

The political detox claims to “scrub away layers of election stress and anxiety that have taken hold” while healing lemon verbena and blood orange and ruby grapefruit and buffing “will leave guests ready to start a brand new chapter.” The treatment starts at $175 on weekdays. The hotel spa is also advertising a complimentary “election escape” add-on for treatments that last 50 minutes or more. The escape includes a scalp treatment, aromatherapy and more.

Over at Los Angeles’ Larchmont Sanctuary Spa, the “election escape package” will be available from Nov. 1 to 7 — when election season reaches fever pitch. The package includes a scalp massage and foot reflexology for “deep healing.”

For the stressed out with deeper pockets, travel site Booking.com pulled together a list of eight post-election vacation destinations because “there’s nothing wrong with a stress-detox in November to prepare for the four years ahead after the polls have closed.”

For those who lack the budget or vacation days to book a spa retreat, the solution may be as simple as unplugging. It turns out social media users are more likely to say the election has turned into a very or somewhat significant source of stress in their lives, the APA found.

“Whatever happens on Nov. 8, life will go on. … Avoid catastrophizing, and maintain a balanced perspective,” the association suggests.

This entry was posted in Elections. Bookmark the permalink.