Dow futures fell in Friday’s late session after an apparent attempted coup in Turkey, as the news began to flow.

Dow futures opened lower on Friday after an apparent attempted coup in Turkey.Art Hogan, chief market strategist at Wunderlich Securities that, since it was a Friday afternoon, there were few players in the market and it was easy for them to move the market.

“The news of this coup in Turkey is hitting us,” he said. However, he emphasized it was a knee-jerk reaction and did not necessarily indicate what the market would look like on Monday.

This is breaking news. Please check back for updates.

“It’s probably just a pause,” said Randy Warren, chief investment officer at Warren Financial. “We’re starting to get decent economic data; now it’s time for earnings to back that up.”

The Dow Jones industrial average ended about 9 points higher, with Boeing and Caterpillar contributing the most gains. The blue-chips index extended its winning streak to six days.

Retail sales beat economists’ expectations, rising 0.6 percent in June versus consensus of a 0.1 percent increase, in another sign that consumer spending increased in the spring.

“The consumer is such a big part of the U.S. economy,” said Bill Stone, chief investment strategist at PNC Asset Management Group. “With retail sales looking good, it really helps what people are thinking about in terms of the economy.”

U.S. consumer prices increased for the fourth straight month in June. The Consumer Price Index rose 0.2 percent last month, the Labor Department said, after a similar gain in May.

A key measure of consumers’ attitudes, Index of Consumer Sentiment,was reported lower so far this month. Sentiment came in at 89.5 for July’s preliminary reading, the University of Michigan said. Economists expected the preliminary sentiment index to hit 93, according to a Thomson Reuters consensus estimate.

Thursday, weekly jobless claims showed no change week over week and the June reading of the producer price index came in better than expected.

“Investors are not being blindsided by the earnings numbers from the big banks; that’s critical to keep volatility low and as low keep market sentiment stabilized,” said Chad Morganlander, portfolio manager at Stifel Nicolaus. “Financials have been reporting resilient earnings, which bodes well for the overall market.” 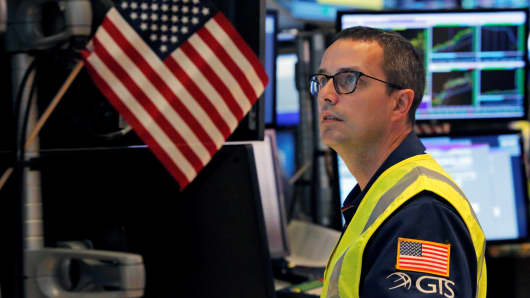 European equities were weighed down by a terror attack in Nice, France that killed at least 84 people.

Thursday evening, a man drove a truck through crowds of people watching a fireworks display to celebrate Bastille Day. French President Francois Hollande said the attack was of a “terrorist nature” and has extended France’s “state of emergency”. At least two U.S. citizens were killed in the attack, the U.S. State Department has confirmed.

“It’s sad that investors are not surprised by such a horrific act but futures here in the U.S. as well as equity markets across the globe seem to be looking at this as an unfortunate horrific daily occurrence, which doesn’t surprise investors,” Morganlander said. “When investors get surprised that’s when you see an unhinging.”

China’s economy beat estimates Friday with a 6.7 percent expansion on-year in the three months through June, as a string of stimulus measures from the government and the central bank helped shore up demand. Economists polled by Reuters expected a growth rate of 6.6 percent.

The Dow Jones Industrial Average closed 10.14 points higher, or 0.05 percent, to 18,516.55, with Caterpillar leading advancers and Nike the greatest laggard.

Advancers were a step ahead of decliners at the New York Stock Exchange, with an exchange volume of 843 million, and a composite volume of 3.047 billion at the close.

The CBOE Volatility Index (VIX), widely considered the best gauge of fear in the market, traded higher, near 13.