The Egyptian navy has said it has found belongings and parts of the missing EgyptAir’s fuselage about 180 miles north of the Egyptian city of Alexandria.

A statement from the Egyptian army released on Friday morning said that planes and naval teams participating in the search operation for the EgyptAir plane that disappeared mid-flight on Thursday had “managed to find some passengers belongings and other parts of the plane north of Alexandria” and were continuing to search and retrieve what they could.

The search for wreckage from missing EgyptAir flight MS804 that disappeared en route from Paris to Cairo yesterday entered a second day on Friday.

When asked if the military was sure that the wreckage was from flight MS804, Egyptian Ministry of Defense spokesman Brigadier General Mohamed Samir told NBC News: “Yes, of course…we are the military.”

Earlier this morning, EgyptAir had wound back claims that wreckage found near the Greek island of Karpathos was from missing flight MS804, as Egyptian authorities said it was possible a terror attack had brought down the passenger jet.

Greek and Egyptian investigation teams are trying to find wreckage of the missing plane and are being aided by French, Turkish and U.S. military support.

Earlier, authorities said in a statement that wreckage was found near Karpathos Island, and EgyptAir had tweeted that the Egyptian Ministry of Foreign Affairs declared that the debris was from MS804. But the Egyptian flagship carrier’s Vice President Ahmed Adel later told CNN that the company had been misinformed and the wreckage was “not part of our plane.”

“The search and rescue is still going on,” Adel said.

Meanwhile, Reuters cited Egyptian Prime Minister Sherif Ismail as saying that it was too early to rule out any explanation for the crash, including the possibility of an attack like the one blamed for bringing down a Russian Metrojet holiday airliner in Egypt’s Sinai region in October.

And NBC News reported that, when pressed by reporters for his thoughts, Egyptian Civil Aviation Minister Sherif Fathy said the possibility of a terrorist attack was stronger than that of a technical failure.

There were conflicting reports about the insight that had been gathered so far about the flight.

A senior U.S. Intelligence official familiar with U.S. capabilities in the region told NBC News that “phenomenology” (infrared and multispectral images) indicated strongly that there was an explosion on MS804. The cause remained unclear, the source said. The U.S. has what is described as a “persistent stare” on the region, which collects everything from sound waves through multispectral images to pressure.

Officials from multiple U.S. agencies told Reuters, however, that a review of satellite imagery had not so far detected any sign of an explosion on board the flight.

Greek Defence Minister Panos Kammenos said that the Airbus A320 had swered 90 degrees to the left then spun through 360 degrees to the right before plunging from an altitude of 37,000 feet to 15,000 feet before disappearing from Greek radar screens, Reuters reported.

Earlier, Egypt’s aviation minister told a news conference that there are no known security issues with passengers on the missing plane, although further checks were underway.

Two U.S. intelligence officials told NBC News there was “nothing finite, nothing specific” in chatter about a coming attack on aviation. There is nothing out there yet to confirm “foul play,” according to the officials.

The Greek army deployed two aircraft, a frigate and two helicopters to the search and rescue operation 130 nautical miles south-southeast of Karpathos. The announcement was in addition to shipping data purportedly showing other marine traffic changing course to help the operation.

Greece has banned flights from an area stretching 40 miles around the last point of signal from the flight. 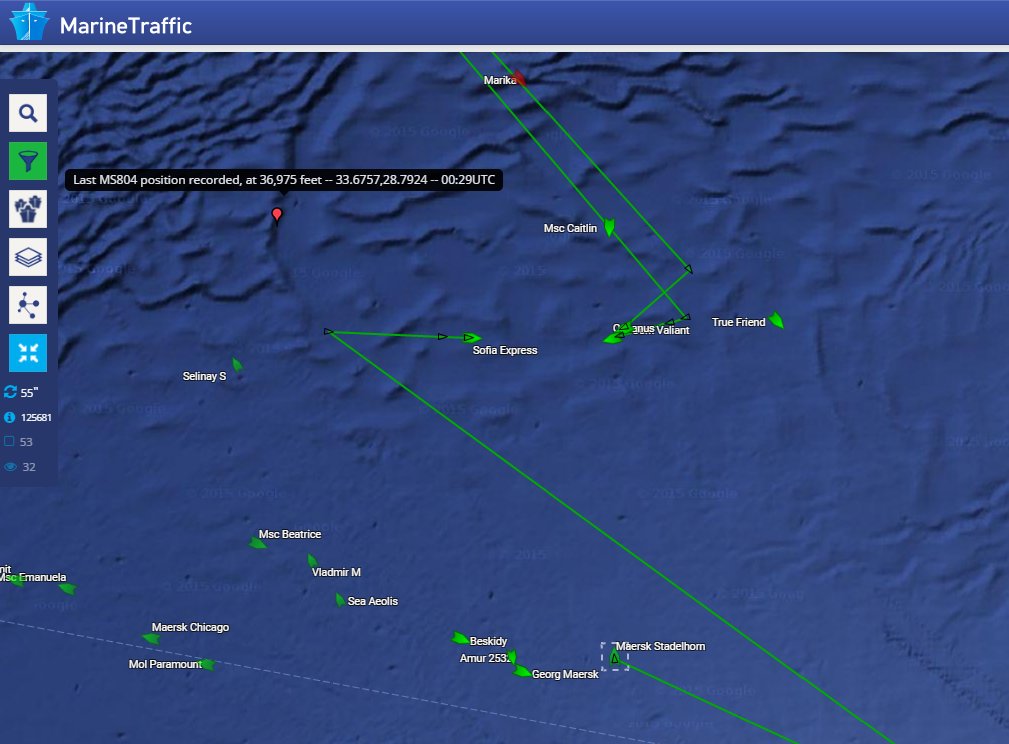 EgyptAir was updating its Twitter account regularly and said Egyptian Prime Minister Sherif Ismail had arrived at the airline’s crisis center after cutting short a visit to Jeddah, Saudi Arabia.

The airline urged restraint from the media in the reporting of the incident amid conflicting accounts about distress signals from the missing plane.

News of the incident emerged in the early hours of Thursday. In an Arabic-language Facebook post just before 5 a.m. local time, EgyptAir cited an “official source” as saying the flight, which took off from Paris’ Charles de Gaulle Airport at 11.09 p.m. Paris time, had “disappeared from radar in the early hours of (the) day.”

In a series of subsequent tweets and statements, EgyptAir said the plane was carrying 56 passengers, including one child and two infants, as well as three of the airline’s security personnel and seven crew members, taking the total number of people on board to 66.

It also said the plane was manufactured in 2003. The “aircraft commander” had 6,275 hours of flight experience, including 2,101 on the same model plane, and the assistant pilot had 2,766 hours of experience, the airline said.

EgyptAir also released a list of the passengers’ nationalities: 15 French, 30 Egyptians, two Iraqis and one person each from the U.K., Belgium, Kuwait, Saudi Arabia, Sudan, Chad, Portugal, Algeria and Canada. Canda later said that there were two Canadians on baord.

French President Francois Hollande spoke to Egyptian President Abdel Fattah el-Sisi, according to a statement released by Hollande’s office in the hours after the disappearance.

“They agreed to cooperate closely to establish as soon as possible the circumstances of the disappearance,” the statement said. “The President of the Republic shares the anguish of the families affected by this tragedy.”

Ellis Taylor, an Asia editor at Flightglobal magazine, noted the disappearance at 37,000 feet was unusual.

“Accidents are usually at landing or takeoff,” he told CNBC. “Something from that height and so far into the flight indicates that something has gone quite seriously wrong on board.”

He said the aircraft type had a good safety record. Airbus shares fell 1.2 percent when European markets opened Thursday, however, and other travel and leisure stocks declined.

Because the flight disappeared in Egyptian airspace, Taylor said he expected search and rescue operations to relatively quickly locate wreckage or an oil slick.

“It seems they have a good fix on where it was when it disappeared from radar. It should narrow down the search pretty easily,” he said.

A Flightradar24 spokesman said that MS804 was on a normal course that was consistent with other flights bound for Cairo from Western Europe.

Flightradar24
Another radar image that gives context for the position of EgyptAir flight MS804 until it dropped off radar, from the website of global flight tracking service Flightradar24

In October a Russian holiday jet crashed in Egypt’s Sinai region, killing all 224 people on board.

The Airbus A321, operated by Russian airline Kogalymavia under the brand name Metrojet, was flying from the popular Egyptian Red Sea resort of Sharm el-Sheikh when it went down in the central Sinai soon after daybreak, crashing into a mountainous area shortly after losing radar contact while near cruising altitude.

Russia said that the plane had been brought down by a bomb, as did the U.S. and other Western governments, and the Islamic State (IS) militant group claimed responsibility. But Egypt said that its investigations revealed no sign of terrorism.

Reuters reported in January that an EgyptAir mechanic, whose cousin had joined IS, was suspected of having planted a bomb on the flight.

And in March, an EgyptAir flight from Alexandria to Cairo was hijacked by a man who claimed to be wearing a suicide belt. He forced the plane to land in Cyprus, but authorities said later that the suicide belt was fake.

This entry was posted in Uncategorized. Bookmark the permalink.