What Wisconsin means for Trump, GOP and Ryan

Tuesday’s primary in Wisconsin could decide whether Donald Trump is the nominee of the Republican Party or gets tossed aside at the GOP convention in Cleveland in July.

Trump faces the prospect of a significant loss to Sen. Ted Cruz in in the Midwestern state. One late ARG poll put Trump up 10 points, but ARG has been wrong before and most other surveys still show the Texas senator in the lead by a solid margin over Trump. The Real Clear Politics average of Wisconsin polls shows Cruz up by 4.7 percent.

The stakes are enormous because should Trump lose, his path to getting the 1,237 delegates he needs to lock down the nomination before the convention will become very difficult, especially with a number of remaining states not choosing bound delegates in their nominating contests. 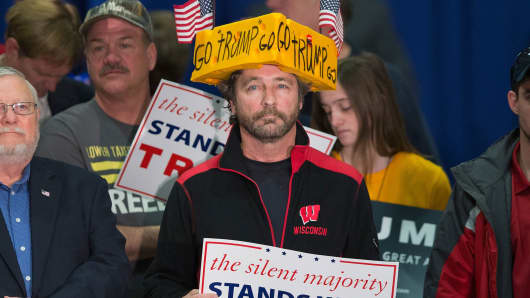 Trump would need to win around 70 percent of all remaining delegates if he gets beaten soundly in Wisconsin. That’s not impossible with some Trump-friendly states coming up in the Northeast. But it would require him to dominate in ways he has failed to do so far.

According to The Wall Street Journal, no matter what happens in Wisconsin, Trump cannot clinch before the final primary day, June 7, when California, New Jersey, Montana, New Mexico and South Dakota have contests. Losing Wisconsin won’t guarantee that Trump would face a contested convention — one in which many delegates could abandon him on a second ballot — but it would make that scenario increasingly likely.

And no matter how much Cruz says it will never happen, it’s still quite possible the eventual GOP nominee is not even in the race right now. The most likely savior candidate remains House Speaker Paul Ryan, who will be the chairman of the convention in Cleveland. Top Republican insiders are not so quietly taking up Ryan as the one person who could unite the warring establishment and grassroots conservative wings of the party.

Just like he did before becoming speaker, Ryan is saying he doesn’t want it, that it won’t be him, that people should focus on the candidates in the race and all the rest. But that is mostly calculation on his part. The only way Ryan could ensure that he not become the nominee is to do anything overt to show he wants it.

And anyone with doubts that Ryan has at least one sharp eye on the prospect of becoming the nominee should go back and read a speech he gave to Capitol Hill interns on March 23 entitled “The State of American Politics”. The address was a not very subtle rebuke of Trumpism and an alternate vision for how the party could approach a race against likely Democratic nominee Hillary Clinton in the fall.

“Looking around at what’s taking place in politics today, it is easy to get disheartened. How many of you find yourself just shaking your head at what you see from both sides?” Ryan asked. “Our political discourse — both the kind we see on TV and the kind we experience among each other — did not use to be this bad and it does not have to be this way. … I have made it a mission of my speakership to raise our gaze and aim for a brighter horizon.”

Now if that is not a presidential announcement speech in waiting, then such a thing does not exist. The address even came with a hashtag: #ConfidentAmerica. That sounds like the kind of slogan — an alternative to Trump’s “Make America Great Again” — that could launch Ryan out of Cleveland onto the campaign trail.

There would certainly be an initial revolt among Trump and Cruz supporters should either candidate be denied the nomination at the convention. But if neither one can garner a majority on the first few ballots, Ryan could easily get drafted as a consensus alternative with national campaign experience and a deep well of respect within the party.

Ohio Gov. John Kasich still harbors hopes of emerging as a consensus candidate after multiple ballots but he lacks stature with national Republicans annoyed that he is still in the race, and he is deeply distrusted by ideological conservatives.

On the Democratic side on Tuesday, Sen. Bernie Sanders has a narrow lead over Clinton in Wisconsin. But the Clinton campaign is already dismissing a Sanders win, saying any result in a close race won’t significantly alter the former secretary of state’s big delegate lead.

Clinton remains close to a lock to get the Democratic nomination. That could change if the Vermont senator stages a huge upset in New York on April 19. But for now it still looks like it will be Clinton versus someone other than Trump in the fall. That someone could be Ryan.

This entry was posted in Elections. Bookmark the permalink.