When Kimberly Bryant was in college in the ’80s, she felt culturally isolated in her electrical engineering classes.

“I was one of maybe two or three students of color,” said Bryant, who is African-American. “And I found that representation was still the same when I graduated and began my career.”

Not much has changed. Black women make up less than 3 percent of the workforce at the biggest U.S. tech companies.

So, when Bryant’s daughter Kai, now 16, expressed interest in following in her mother’s footsteps, Bryant decided to literally change the face of the industry.

“I wanted to create more people that look like me and look like my daughter to really fill in the gaps that I saw for myself,” Bryant said. “When we generally think of a computer scientist now, it does not look like a woman of color, it does not look of someone that is of Hispanic background. It’s very much white male dominant. And that’s important for us to show that black girls can code and they can do many other things in terms of a leadership standpoint in this field.” 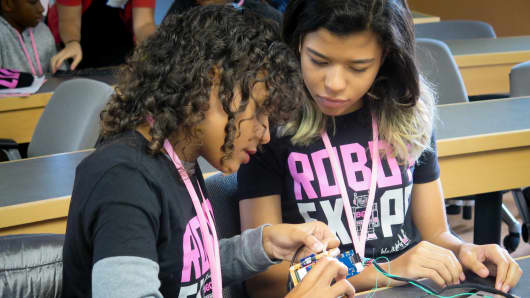 After working in biotech for more than 20 years, Bryant founded Black Girls Code in 2011. The nonprofit organization brings together girls 7-17 for weekend coding workshops, to learn how to build websites, create mobile apps and build robotics.

As the name implies, Black Girls Code is aimed at young women of color, but everyone is welcomed.

Funding comes in part from donations and a $35 fee to attend workshops, which can be waived in some cases. The rest comes from corporate sponsors and partners.

More than 5,000 girls have participated in the programs — many of them, multiple times.

“You interact with people and it’s like ‘Oh, I enjoy this’ and you come back and do it again and again and again,” said 11-year-old Madison Harvey, who was among 300 girls who attended a recent Black Girls Code Robot Expo in Berkeley, California, her second event with the group.

Getting her to her first event took some convincing.

“At first she was a little hesitant,” said Madison’s mom, Vangeria Harvey. “Like ‘I’m not really sure, I don’t know that I have the skills to go to a class.'”

“She had such a spectacular time that we were just waiting for the opportunity to arise for her to be able to go one more time,” said Harvey. “She’s excited about science and math and engineering, and what other opportunity for her to be around other girls that look just like her.”

It is, in fact, difficult for many of these girls to find role models in the field of computer science.

While white men account for only 34 percent of the U.S. workforce, according to the latest data available from the U.S. Census Bureau, they fill a staggering 49 percent of the jobs in computer and mathematics occupations.

Only 2.8 percent of those jobs are occupied by a black woman, although the group makes up more than 6 percent of the workforce.

Women overall fill only about one-quarter of computer and mathematics jobs, while making up almost half the workforce, at 47.5 percent.

“There is a lack of role models, a flat-out lack of exposure, a stereotype bias of what is a technical person,” said Ruthe Farmer, chief strategy and growth officer and director of the K-12 Alliance for the National Center for Women and Information Technology. “It’s held by parents, it’s held by the media, it’s held by teachers. There’s no social cost to a boy to take computer science in school. Girls have to take the brave step of saying “I love this stuff,” take a class with 90 percent boys, probably a male teacher, overcome the media message, defy their social group. Add on the layer of being a minority, it’s another challenge.”

About 1.2 million tech jobs are expected to be available by 2020. At the rate we’re going, Farmer said, there will only be enough technically qualified people to fill 39 percent of them. “We as a country want to have an educated workforce and innovation economy. We need to include everybody,” she said. “If you add up the groups that are missing, it’s 75 percent of the population. Secondary to that, the imperative around the designed world is it should be designed by the people who live in it.”

The problem is so profound, the White House is taking action. President Barack Obama last month announced the “Computer Science for All Initiative,” and proposed $4 billion over the next three years to expand computer science access in schools.

The plan will “help make sure all our kids get an opportunity to learn computer science, especially girls and minorities,” Obama said.

Black Girls Code is making inroads. Although the organization is still young, it’s already having an impact. Some former participants are now majoring in computer science at top schools.

Brianna Fugate was planning to study biology, with intentions of going to medical school. By the time she found Black Girls Code she was too old to participate as a student, but she decided to volunteer. “I sat in on the workshop and was inspired by the young girls who were using their creativity and imagination to create their own websites. It was truly magic,” the now 19-year-old Spelman College sophomore told CNBC. She was inspired to research coding and went on to become a mentor with Black Girls Code. She then won a spot in a three-week Google immersion program, learning from the company’s software engineers, and changed her major to computer science. “I have never looked back on my career decision,” Fugate said.

Madison, who said she “had no interest in doing this, I thought it was kind of boring at first,” is also thinking about her future. 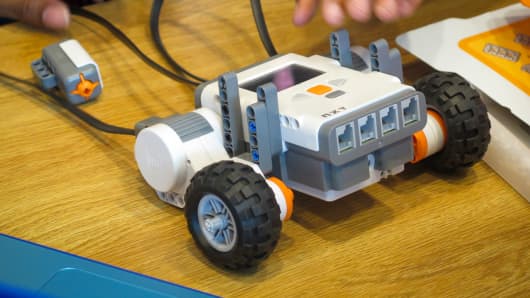 “It’s got me an open mind, so it’s like a door opened for me. So it’s a possibility that I might want to pursue this,” she said.

Bryant couldn’t be prouder. “We’re starting to see that shift where girls are really voicing their interest in computer science and see that they have a place at that table,” she said. “I’m looking to see more women of color not only in companies in technology, but also creating companies. I think we’re changing not just the minds of the girls, but the minds of everyone around them as well.”

And, she’s not stopping there. Bryant is planning to introduce Black Boys Code in the near future.

Watch CNBC’s “Power Lunch” each day this week to see the work being done to bridge America’s divide.

This entry was posted in Education, News. Bookmark the permalink.