What US and Chinese stocks have in common

Brendan McDermid | Reuters
Trader on the floor of the New York Stock Exchange.

Plunging oil prices and China’s market meltdown have been cited as two big culprits behind market volatility this summer, but history shows less correlation between these markets and U.S. stocks than many investors might expect.

In the case of Shanghai stocks, the S&P 500 has been very loosely correlated, but in the last several sessions the two have moved slightly closer together, according to RBC Capital Markets data. Oil prices and other commodities may be falling because of concerns about China’s economy, but oil has only a tiny correlation to China’s Shanghai index, according to analytics firm Kensho. Where 1 is the perfect positive correlation, Brent crude’s correlation to the Shanghai composite is just around 0.1 over the last year.

Oil’s moves are much more closely tied to the U.S. stock market, and even though it may feel like stocks react to every move in crude lately, the correlation of the S&P 500 with Brent is about 0.42 over the last year, according to Kensho. Energy is a big industry, but the weight in the S&P 500 market cap is just 6.8 percent, and it contributes 4.9 percent of the earnings, according to RBC Capital Markets. 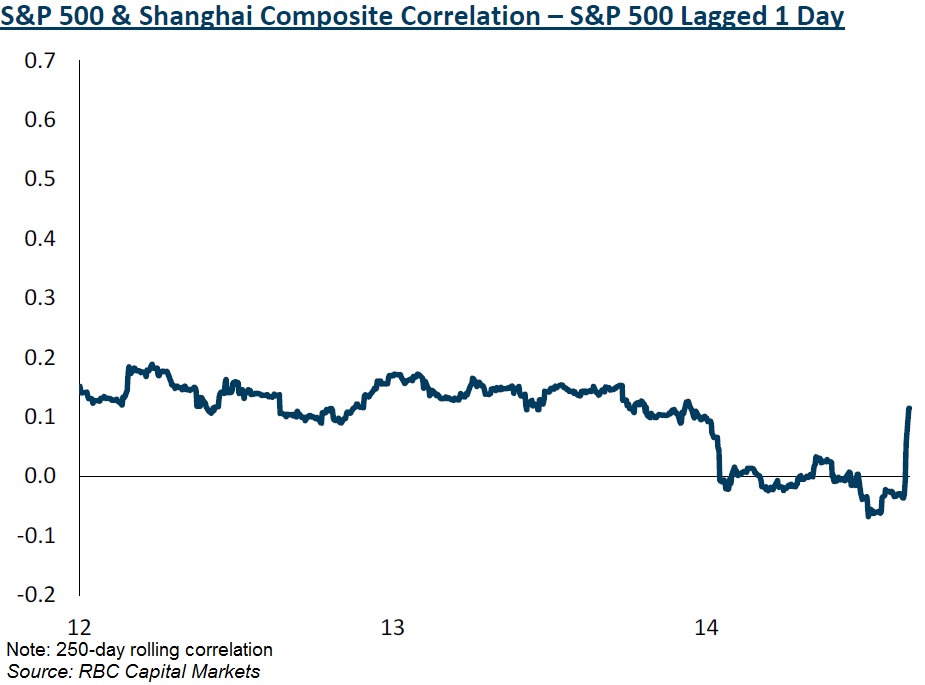 The correlation between the S&P 500 and Shanghai is very loose, at about 0.15 over the past two years, according to Kensho.

But RBC data show, based on a 250-day rolling correlation, that the Shanghai market was more disconnected from the U.S. market during the months when it was racing 60 percent higher in the first half of this year. The correlation sometimes even became slightly negative.

When the market turned and began to come down to Earth, the correlation changed, and it became more closely correlated to the S&P 500, though it is still minuscule.

The U.S. is much more correlated with Hong Kong’s Hang Seng index, at a 0.34 correlation for the past year. Hong Kong, meanwhile is closely correlated to Shanghai, with about a 0.58 correlation in the same period.

“The correlations have gone up in the last three months, but I would say it still suggests a fact that oil and the S&P are more highly correlated (and) would suggest to me that the Shanghai market is a bit of a lone wolf in here,” said Robert Sinche, global market strategist at Amherst Pierpont.

That could change, and Shanghai could ultimately become more correlated to not only the U.S. but to other global equity markets, according to Peter Donisanu, global research strategist at Wells Fargo Investment Institute.

“Out three years, it could be positive as we continue to see more maturing in China’s stock market, meaning more institutional investors participating in that market, and we’re starting to see that today. In the near term, I think there are other factors besides the Chinese stock market that will drive the U.S. stock market,” he said. “Right now U.S. markets are hypersensitive to what the Fed’s going to do next.”

He said oil is being driven more by supply than the China demand story.

“That supply continues to accelerate with Iran coming on next year. … The cloud of China hangs over commodity prices. … In the near term, the correlations are just all over the place, and the story we’ve been sharing is that short-term fundamentals are out. This is really just a sentiment-driven market anyway now,” he said.

The Shanghai market is largely the domain of local retail investors, who make up about 75 percent of the market.

“It has been more of a forum of gambling than as an investment vehicle. To get to the point, where the Chinese market becomes more correlated with what’s going on in Europe and the U.S., that’s going to take more participation from informed investors,” Donisanu said. 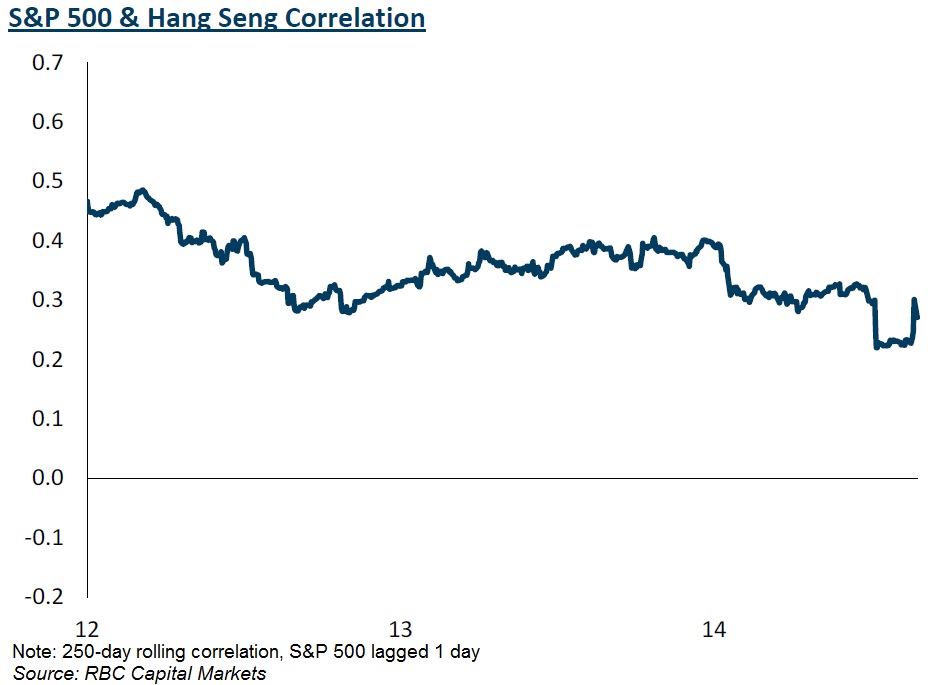 If the MSCI emerging markets index accepts mainland Chinese shares eventually, more institutions and foreign investors will become involved in that market. MSCI put off approval for China with a list of conditions, but it will review the mainland markets for inclusion again in the next year.

Donisanu said the Chinese market’s performance will be based on how much confidence the local individual investor has in the Chinese government. The Shanghai composite is off 43 percent from its high in June, but it is still up 33 percent in the last year. The S&P 500 is off about 8 percent from its May high.

“What drives the correlations is not the markets. It’s what’s going on in the world. During the financial crisis, the correlation went to 1 for all risk assets. Everything sold off,” Donisanu said.

Analysts said Shanghai may actually start to become more correlated with emerging Asian markets since their economies are more closely tied. “There are strong trade partnerships between China and Southeast Asia,” Donisanu said.

Donisanu said the U.S. market is much more correlated to Europe, and any economic disappointment there could show up on U.S. shores.

Disclosure: NBCUniversal, parent of CNBC, is a minority investor in Kensho.