How to cash in on this year’s big currency trend

The U.S. dollar index is finding upside again after taking a 2½-month break from its big rally. And technical analyst Craig Johnson says he expects big gains for the greenback.

“Ultimately what I see happening with a little bit of weakness over the last several weeks here is really just a pullback in what we believe is a longer-term uptrend in the dollar,” said Johnson, senior technical research analyst at Piper Jaffray and president of the Market Technicians Association.

Examining the chart of the PowerShares dollar index ETF (UUP), Johnson said “there’s pretty good support at the rising 40-week moving average at about $24 and change.” On Monday morning, it was at $25.61. 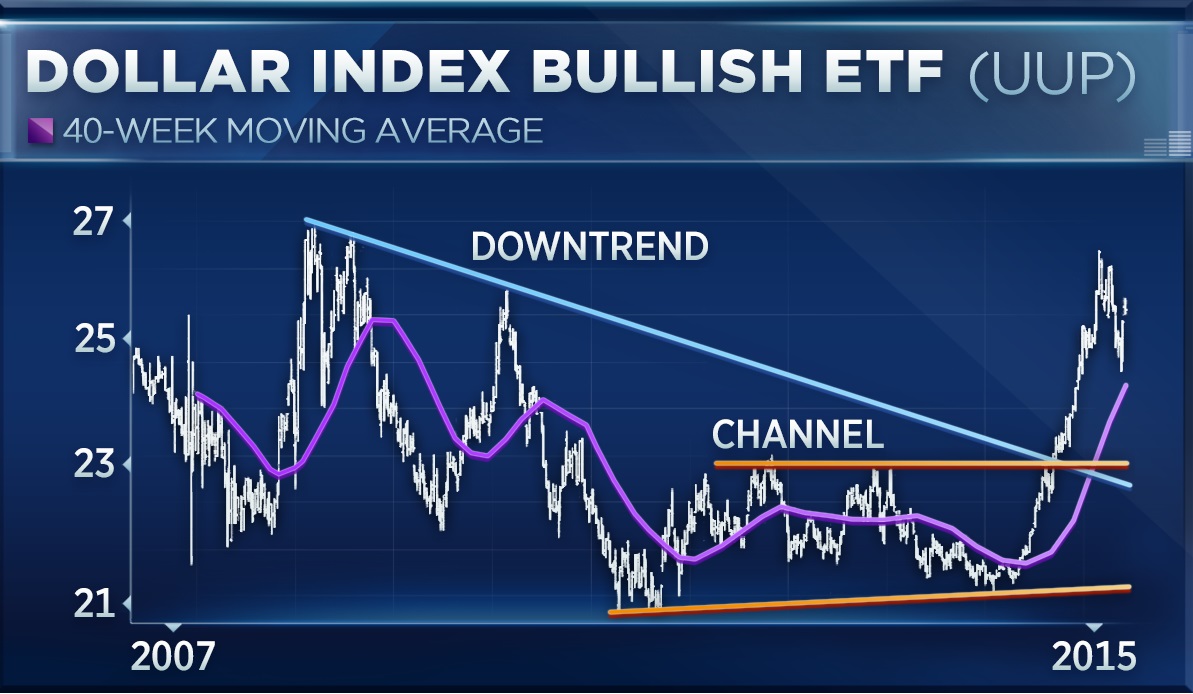 To Johnson, the recent dip “just looks like a correction. Keep in mind that the price action we’ve seen in the dollar this year has reversed about a five-year downtrend, and that’s something we don’t want to ignore. And the recent price action to us is just kind of a low double-digit pullback.”

“The primary trend is still up, and we think that’s the way we should be trading this,” he said Friday on CNBC’s “Power Lunch.”

In other words, he recommends that traders buy the UUP ETF in order to play for further upside in the dollar.

Fundamentally, currency trader Boris Schlossberg says the dollar’s next move will depend on the spate of data on tap this week, most critically Friday’s jobs report for May. Better economic data will convince traders that the Federal Reserve will raise short-term rates sooner rather than later, which would be positive for the greenback, as it increases the return that investors receive merely by hanging onto the U.S. currency.

“If we do see an improvement, I think the dollar rally really continues,” BK Asset Management’s Schlossberg said Friday. However, “if we don’t, it could just be another bear trap, and we could be correcting right back again.”

Want to be part of the Trading Nation? If you’d like to call into our live Monday show, email your name, number, and question to TradingNation@cnbc.com.

This entry was posted in Currencies. Bookmark the permalink.