A high-frequency futures trader has been charged with illegally manipulating the stock market, contributing to the May 2010 “flash crash,” according to documents unsealed Tuesday.

Sarao was arrested Tuesday in the U.K., and the U.S. is requesting his extradition, the DOJ said. The charges were filed in a federal complaint in February, but were unsealed today following the arrest.

The Commodity Futures Trading Commission also filed parallel civil charges against Sarao on Tuesday, calling him a “very significant player in the market.”

The CFTC alleged in a conference call that Sarao was believed to have profited by about $40 million for his scheme. U.S. authorities have frozen nearly $7 million worth of his assets and accounts, Aitan Goelman, CFTC director of enforcement, said on the call. 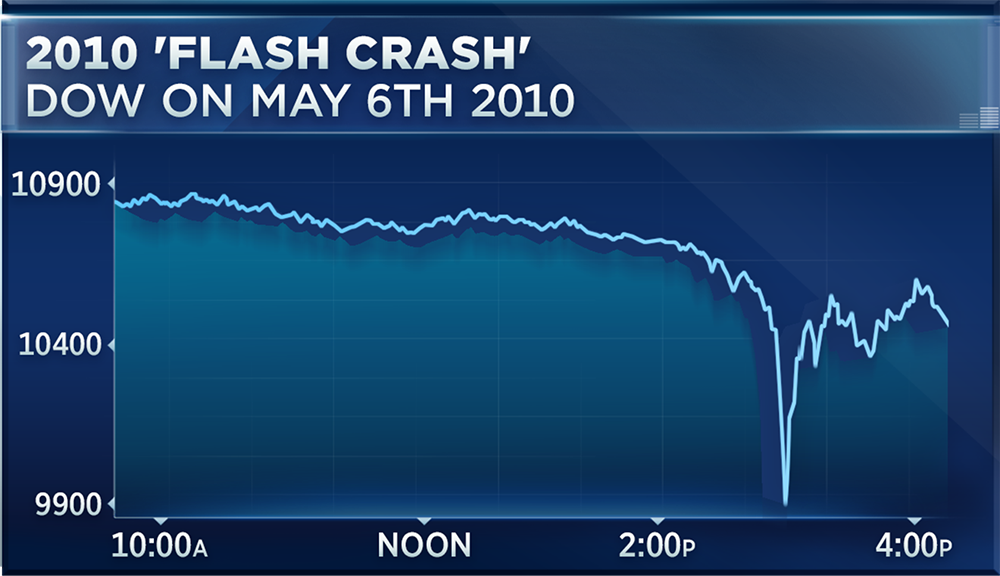 The complaint alleges that Sarao “used an automated trading program to manipulate the market for E-Mini S&P 500 futures contracts (E-Minis) on the Chicago Mercantile Exchange (CME),” according to the DOJ.

By manipulating these futures tied to the Standard & Poor’s 500 Index, Sarao allegedly “earned him significant profits and contributed to a major drop in the U.S. stock market on May 6, 2010, that came to be known as the ‘Flash Crash,'” the DOJ said in a release.

During that market event, the Dow plummeted about 600 points in approximately five minutes after E-Minis quickly tanked.

Read More What are the ‘E-minis’ behind the flash crash?

According to the complaint, Sarao allegedly used a “layering” strategy—a form of spoofing where “a trader places multiple, bogus orders that the trader does not intend to have execute.” These fake orders could manipulate a price by tricking other trading participants by creating the false impression of either increased supply or demand for a security.

Layering is a more complicated form of normal spoofing because it implies that there are many orders as opposed to just a single fake price, according to Joe Saluzzi, partner and co-founder of Themis Trading.

“Now here we are five years after the report and finally someone’s recognizing it was a spoofer,” said Sal Arnuk, another partner and co-founder of Themis Trading.

He called it “shocking and scary” that it took authorities five years to charge anyone for the flash crash.

The complaint said that Sarao engaged in discussions with the CME about his trading activities, and suggested in a 210 email that he had “just called” the exchange “and told em to kiss my [a–].”

The CFTC’s Goelman alleged that Sarao is believed to have engaged in market manipulation or spoofing on about 400 days between 2010 and 2014, and continued doing so as recently as this year.

Daniel Acker | Bloomberg | Getty Images
A NYSE trader during the flash crash on May 6, 2010.

Spoofing was specifically made illegal in the 2010 Dodd-Frank financial law overhaul, which became effective in July 2010. The CFTC alleged that Sarao violated an earlier law that also barred manipulative trading.

Although such charges are not frequent occurrences in the U.S., Saluzzi suggested the the layering strategy could be more widespread.

“If there’s one, there can be hundreds,” he said. “Why can’t there be hundreds of people doing the same thing all over the world?”

Read More The lasting impact of the 2010 flash crash

Goelman said that Sarao’s alleged conduct was “at least significantly responsible” for the E-Minis imbalance that led to the flash crash, and the DOJ’s complaint said the trader’s “use of the dynamic layering technique was particularly intense in the hours leading up to the Flash Crash.” But it is unlikely that such actions could be blamed for the entirety of the event.

A 2010 joint report from the Securities and Exchange Commission and the CFTC claimed that a single large trade from Kansas’s Waddell & Reed Financial was to blame for setting off the flash crash.

Bill Gross, the Janus Capital bond guru, told CNBC that he would not focus too much on the significance of Sarao’s arrest, but instead suggested that the importance lies with the fact that a highly-leveraged market created conditions for the flash crash.

—Reuters and CNBC’s Evelyn Cheng and Matthew Cuddy contributed to this report.

This entry was posted in Crime and Law. Bookmark the permalink.