When it comes to out-of-pocket medical bills, many Americans don’t have enough money in their pockets—or anywhere else—to cover what they might end up owing.

A new study finds that significant numbers of people have less money available in liquid assets than what they face in the maximum deductibles and total out-of-pocket health cost limits under insurance plans.

The situation only gets worse for households when considering their exposure to total out-of-pocket costs. Just 48 percent of households have enough liquid assets to cover what were considered to be the mid-range of such out-of-pocket health cost limits: $3,000 per individual and $6,000 per family, according to the Kaiser study.

People whose household incomes are moderate or lower-than-moderate have a tougher time scraping together enough cash to cover such costs, according to Kaiser.

But even among people who earn more than four times the federal poverty level, as many as 38 percent of of them lack enough available cash to pay the maximum amounts they would personally owe for health-care bills during a year.

Not enough in the bank, but borrowing an option

The findings come as job-based health plans—the most common form of private insurance in the U.S.—are shifting more of the costs of medical care to enrollees. Those costs include deductibles, co-payments and co-insurance.

“A fair number of households don’t have that kind of money in the bank to cover a higher deductible, or to pay their entire…potential out-of-pocket exposure,” said Gary Claxton, lead author of the Kaiser report.

“That doesn’t mean they can’t borrow money or put it on their credit cards,” he said. “But they don’t have the cash to make the payment.”

The study comes with a caveat: It looked at the highest amounts that people could face in deductibles and total out-of-pocket costs, not at what the average person actually pays during the year. Healthy people can end up paying little or no out-of-pocket medical costs in a given year.

Read More Retirees may shell out $220K for health

“It’s the person who gets really sick who faces the potentially big bills,” Claxton said.

For the purposes of the study, Kaiser considered a “liquid asset” to be either cash, or financial instruments such as stocks, bonds or money market funds that could be easily converted into cash. The study then looked at the assets held by households that had at least one person without health insurance, and at assets held by households where everyone had health coverage.

While fully insured households were better positioned overall to cover deductibles and other out-of-pocket costs, having insurance is no guarantee that people will avoid having to borrow to satisfy those bills, Claxton said.

‘Hard time paying’ the doctor, even with insurance 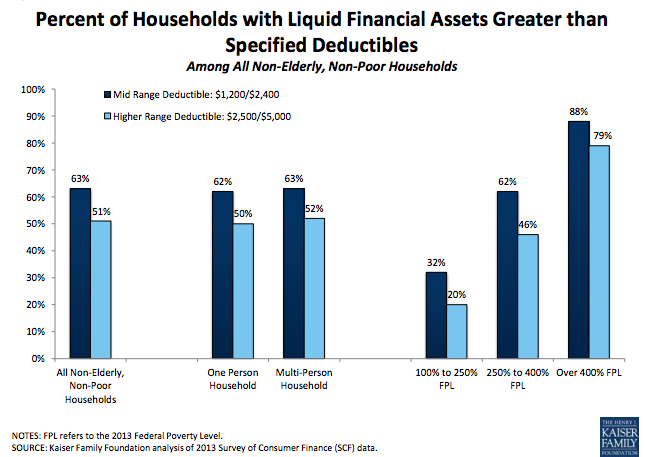 Among fully insured households that earned between 100 to 250 percent of the federal poverty level—or $11,670 to $29,175 for individuals—just 29 percent had liquid assets greater than the mid-range of maximum out-of-pocket costs: $3,000 for an individual, and $6,000 for a family.

That, however, fell to a mere 18 percent of households when their assets were compared to the high range of out-of-pocket costs: $6,000 per individual, and $12,000 per family.

Only 47 percent of fully insured families earning between 250-to-400 percent of the poverty level would be able to cover the mid-range of out-of-pocket costs with liquid assets, Kaiser found. And Just 33 percent of such families could cover the higher range.

Among fully insured households that earn more than 400 percent of poverty level, 78 percent had liquid assets in excess of the the mid-range of out-of-pocket costs. Still, when the high range of such costs were considered, just 65 percent of the richer households would be able to foot the maximum with their liquid assets.

“That explains why we get fairly large percentages of people saying they have a hard time paying their medical bills, even when they have insurance,” Claxton said.

The numbers were more dire when the study looked at households that include at least one person who did not have health insurance.

And only half of such households earning more than that had enough liquid assets available to cover the mid-range of out-of-pocket costs.

This entry was posted in Health Care. Bookmark the permalink.