The best places in the world to launch a start-up

As the world looks for innovative ways to jump-start economic growth through job creation, more attention is being focused on how entrepreneurship can ignite the process.

Taking that into account, the 2015 edition of the Global Entrepreneurship Index—which measures the quality and scale of small-business start-up activity—was released today, coinciding with Global Entrepreneurship Week, an international initiative among more than 150 countries that includes competitions and networking events held globally through Friday, Nov. 23. The end goal: to help aspiring entrepreneurs find mentors and access to capital and spur job and economic growth.

The index, rebranded this year under a new name and expanded, looks at 34 variables that affect the start-up ecosystems in 130 countries, such as entrepreneurial attitudes, the abilities of founders and the growth potential of start-ups. 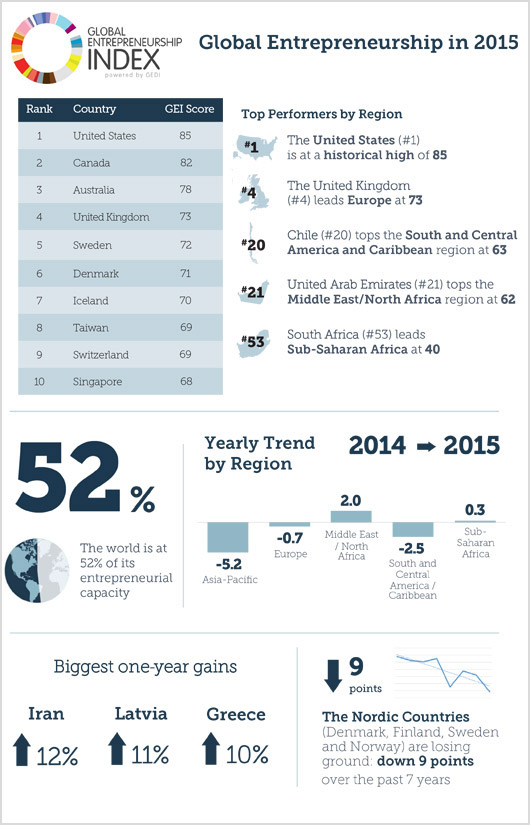 Zoltan Acs, a professor at George Mason University and founder and president of GEDI, said one of the most remarkable findings of the index—given that entrepreneurship was once illegal in some formerly Communist countries—is that there are signs of it in all 130 nations this year. “I find it amazing,” he said.

Ortmans pointed to a powerful incentive that countries are relying on at the moment to promote entrepreneurship: the need to create jobs for the growing youth population in developing economies. “Nations are seeing entrepreneurship from a job creation perspective, to the extent that they’ve had even worse rates of youth unemployment,” said Ortmans.

For instance, in Iran, where interest in entrepreneurship is percolating, youth unemployment is 24 percent. In Latvia, another hotspot for new-business creation, the youth unemployment rate was nearly 22 percent in June 2014. In India it is 18 percent.

As a result, more heads of states’ offices are driving efforts to promote new-business creation rather than delegating this to their commerce ministries, said Ortmans. Meanwhile, interest is percolating at the grassroots level. “The women’s entrepreneurship movement and younger generation are driving the movement globally,” he said.

But even with this activity, the index found that the world is operating at 52 percent of its entrepreneurial capacity—meaning that this percentage of entrepreneurs is engaged in productive, nondestructive business activity. “Destructive” businesses would, for instance, be illegal ones.

One reason entrepreneurship hasn’t advanced further is a lack of strong institutions and capital markets necessary to fuel robust new-business creation, according to Acs. The index reflects this, with impoverished countries such as Malawi, Uganda and Bangladesh at the bottom of the list.

Meanwhile, in some economies, leaders are skeptical about the power of entrepreneurship to create jobs. Given this reality, more research is needed on what will fuel the growth of new companies, so countries know what really works, according to Ortmans.

“As a collective global community, we have to be more disciplined about what data we collect in terms of what works and what doesn’t work,” said Ortmans. “We have seen an explosion of programs but a declining rate of new firm formation overall.”

Many countries face challenges tied to their unique situation. Although entrepreneurship is taking off quickly in Iran, for instance, entrepreneurs are limited by trade sanctions against the country because of its nuclear program.

“Sanctions are really limiting the entrepreneurs here,” explained digital entrepreneur Mohsen Malayeri, co-founder of the Iran Entrepreneurship Association, which runs Global Entrepreneurship Week in Iran. He is also the co-founder and managing director of the Avatech accelerator at Tehran University. Avatech is working with 10 start-ups in its first group. “There’s always a cap where they can’t grow bigger because of the markets,” he said.

And despite widespread interest in entrepreneurship in Latvia, an Eastern European country between Estonia and Lithuania, lack of seed funding has slowed the growth of technology start-ups, explained Marija Odineca, an entrepreneur and journalist at ArcticStartup, a technology blog. Much of the available funding in the country, which was under Soviet occupation for decades, comes through the government.

“No one wants to invest at the very early stage,” she said.

Currently, funding for Latvian start-ups from nine active regional and local venture capital and private-equity funds adds up to 184.8 million euros, or $230 million, according to research by the Ministry of Economics of Latvia, Ministry of Finance of Latvia, Latvian Guarantee Agency & Deloitte. The first of these funds started up around 2007, said Krists Avots, head of operations at Garage48 foundation, an Estonia-based nonprofit that holds boot camps and hackathons for early-stage Web and mobile start-ups in Eastern Europe.

“The first-generation funds are now still in process of exiting,” said Avots. “They didn’t generate any returns they could be proud of. There’s no hard evidence this is a good investment, which obviously still scares off the private investors.”

Given limited funding, founders sometimes hunt outside of the country for capital, turning to sources in the U.S., the U.K., Scandinavia and Germany, said Avots.

“If you have a good idea and a good team, there are no big obstacles to raising funding in another EU country,” he added.

But even for countries with more developed economies, there are challenges. In the Nordic countries, for instance, entrepreneurship declined in the past year, according to the index. In many countries, parents still think that getting a traditional job is a safer bet, which discourages young people from starting businesses, say experts.

“What mothers think is a good proxy for the culture,” Acs said.

Denmark is one country where entrepreneurship is catching on, but not as quickly as champions would like.

“In Denmark entrepreneurs are seen as idols, but very few people actually want to be entrepreneurs,” said Rasmus Wiinstedt Tscherning, managing director at the Center for Cultural and Experience Economy in Roskilde, Denmark.

One reason, he believes, is fear of losing benefits of the social welfare state. “If you get pregnant, you have one year of full maternity leave with full pay if you are employed by a company,” he said. “If you are an entrepreneur, you have to get that money yourself. You feel safer if you are employed.”

As managing director of the International Creative Business Cup Finals, a high-profile world championship for creative entrepreneurs in Global Entrepreneurship Week taking place at the Confederation of Danish Industry, and Tivoli Hotel & Congress Center in Copenhagen from Nov. 17 to 19—he’s trying to ignite interest. The idea is to attract entrepreneurs from the creative class—areas such as architecture, fashion, publishing and toys and games.

“They’re not engineers or MBAs,” he said. “They still have great potential, like Donna Karan or Disney.” The event is picking up traction. Three years ago 17 countries participated. This year more than 50 are getting involved.

Read More Can entrepreneurship be taught? Silicon Valley for the rest of us

One of last year’s winners was Rokoko, founded in March by Jakob Balslev, 27, a film school graduate who previously worked at a big film production company in Denmark. The Copenhagen firm, which claimed third place in the contest, has grown to 10 people. It offers a live animation technology that the firm’s chief technology officer dreamed up.

“He’s the silent technical type—he doesn’t say anything unless you ask him,” Balslev said, talking from his mobile phone on the street in the rain as he headed to his office. “That idea was really good and turned out to be the basis for our whole company.”

Rokoko, which is self-funded, is now paying for its own growth by holding live animation shows for children around the country. Currently, University of Southern Denmark, a Danish university, is testing whether its technology can help children with autism. “We had a small boy a few weeks ago whose parents said he had never seen a theater show from start to finish,” he said. “His attention span was not that long. He had done that for the first time at one of our shows. He could speak to the animated characters. I am sure we are on to something.”

The trick for entrepreneurship advocates like Tscherning is to get more investors who come to Global Entrepreneurship Week interested in backing innovators like Balslev, whose niche is less familiar than areas like clean tech or IT. “It’s a bit unknown,” Tscherning said.

This entry was posted in Entrepreneurs. Bookmark the permalink.