The biggest coffee markets in the world are…

As the U.S. celebrates National Coffee Day on Monday, where exactly are the biggest coffee markets?

Of 80 countries measured by the Euromonitor International market research firm, the U.S. purchased the most coffee in retail stores by volume. 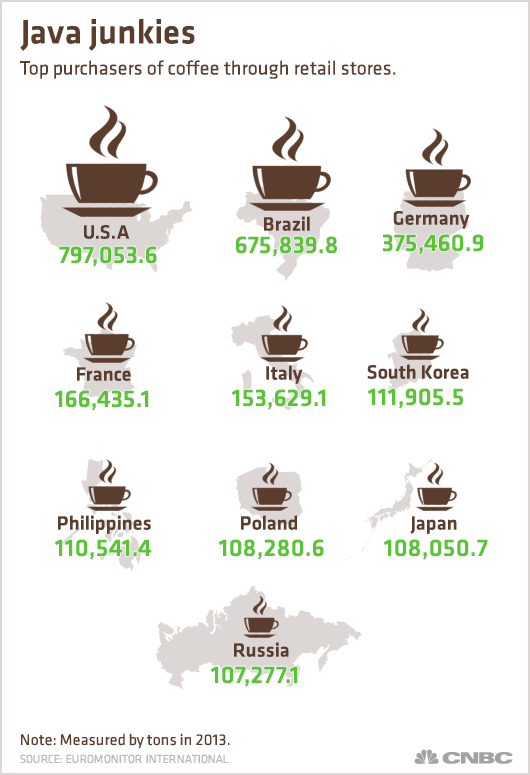 At the other end, China, the world’s most populous country, bought just 44,000 tons of coffee.

Within the coffee market, pod sales have surged. As of the year ended Aug. 23, they now account for 33.9 percent of U.S. coffee sales in all measured retail channels, up from just 9.5 percent, according to Nielsen data, which does not include restaurants or Costco.

“This is the first year that it’s outsold other types of coffee,” Nielsen’s Meg Chari said.

“If it’s coffee or other things, they’re looking for convenience,” Chari said. “That’s why we’ve seen the growth of all sorts of convenience breakfast products.”

Recently, coffee has come into greater focus at restaurants as chains seek to expand their breakfast business and promote coffee heavily.

Of all foods and beverages, coffee remains the top item consumed at breakfast, according to the NPD Group. In the year ending in August, coffee servings ordered at U.S. restaurants rose 5 percent to 7.9 billion.

Coffee’s growth is noteworthy in light of the ho-hum overall restaurant landscape as many chains are struggling to perk up customer traffic.

This entry was posted in Food & Beverage. Bookmark the permalink.