Apple stock getting its mojo back

Apple stock looks like it’s getting its juice back.

And analysts say it could continue to gain even if it doesn’t announce a futuristic sounding plan to turn the iPhone into a remote control for everything in the home, as reported this weekend in the Financial Times.

Apple stock has popped 18 percent since reporting earnings just five weeks ago, ten times the gain in the S&P 500. At the time, it also announced a 7-for-1 stock split, dividend hike and bigger share buyback, which have also helped boost its stock.

“I think there’s still another leg up here, once these new product categories come out. It was over penalized on the way down. The simple answer is I don’t think it’s overvalued,” said Gene Munster, who follows Apple at Piper Jaffray.

Munster said he didn’t have an opinion on the specifics of the FT story, but Apple has discussed smart home technology in the past. He also says a larger screen phone, expected in September, could also justify the stock price.

“Whether it’s announced at WWDC or not, the important part of it is there’s a lot of important stuff coming in the back end of the year because of their R and D spend, and whether it comes June 2 or Dec. 41 to us is irrelevant. We’ve been waiting years for this,” Munster said.

Munster said Apple has invested heavily, and it should pay off. Since 2011 to the first quarter of 2014, Apple has spent $14 billion on research and development. That dwarfs the $8.1 billion spent between 2001 and 2010.

Wall Street analysts have a target range for Apple from below $600 to a high of $777 at Cantor Fitzgerald, according to FactSet. The stock is still well below its all-time high reached on Sept. 21, 2012, when it touched $705.07.

The FT report said that Apple is developing a new software platform that would turn the iPhone into a remote control for lighting, security systems and home appliances.

The report points out that Silicon Valley sees this home automation as the next frontier, with Google’s $3.2 billion purchase earlier this year of Nest Labs, a maker of thermostats and security systems that are connected to the Internet.

Apple would be taking on both Google and Samsung with any announcement on smart home technology at its June 2 Worldwide Developer Conference in San Francisco, California.

Rival Samsung has developed a range of smart appliances including refrigerators, TVs and washing machines, all of which can be controlled by its smartphones and watches.

Icahn said, in a tweet, shortly after the announcement that he was pleased with the results and “Believe we’ll also be happy when we see new products.”

Munster said the the stock split, effective June 6 for shareholders of record June 2, could create some fresh buzz around Apple.

“There’s probably some retail impact form it. It’s natural,” he said. If split at current levels, it would be about $88 per share, but he would expect to hear immediate calls of $100 targets on the post-split stock.

“We’re still at $640 (pre-split target) but depending on what the new products are we’re just going to take that into consideration, whatever that might be,” he said.

Scott Redler, who trades short-term technical trends at T3Live.com said Apple looked overextended. On Tuesday, he sold the position he was trading with a net long bias since after the earnings news in April.

“There’s a little sex and sizzle behind it which there hasn’t been for a while,” he said. “For the long- term investor, I’d say stay put. For the intermediate trade, this is a place to trim and trail.”

“I’m an Apple bull, but I’m also an Apple trader,” said Redler, adding he may buy it back if it comes down a few dollars. “It’s overbought intermediate. The market oscillators are above 50, which are always a short-term rest signal.”

The health of Apple, a stock so widely held it was even in bond funds, was once viewed as a meter for the health of the broader market. But Apple lost 45 percent from its September 2012 peak to its trough of $385 on April 19.

“It’s trading amazingly,” said Peter Boockvar, chief market strategist at Lindsey Group. “Apple has been its own animal. It was a poor performer in 2013 and that said nothing about the broader market. It is its own asset class. It can go up a big percent, go down a big percent and have no impact on the broader economy. It’s more influenced by its own product lines and competion rather than the ebbs and flows of the economy.”

He does not follow Apple from a fundamental perspective but says the stock can still move higher even though it looks overextended.

Read More Would you buy Apple after the split?

There’s another factor that could also push Apple stock higher. Morgan Stanley analysts say major shareholders of Apple are now significantly underweight and as they rebalance, that could fuel further gains in the stock, heading into the iPhone 6 product cycle, launch of iWatch and other potential services. 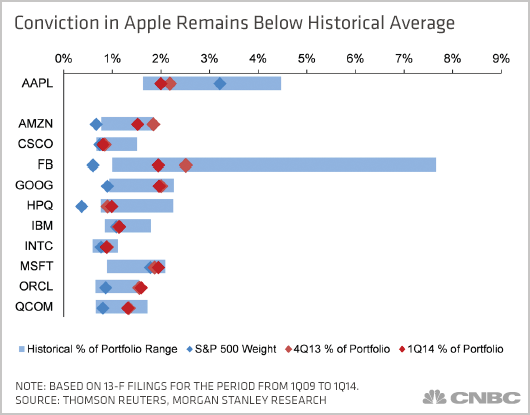 In a note, the analysts say the top 100 holders of Apple are underweight as compared to the overweight for other large-cap technology stocks, such as Facebook, Microsoft and Oracle. They say among the top 100 holders, the allocation to Apple as a percent of total portfolio dropped from 2.2 percent at the end of the fourth quarter, to 2 percent at the end of the first quarter.

The ownership concentration is also the lowest for Apple with the top 100 holders accounting for just 43.4 percent of the total float, well below the 50.8 percent average and 53.2 percent for other large-cap tech stocks, the analyst said. Hewlett-Packard and Microsoft have seen allocations rise at the same time.

This story was updated to include clarification of Redler’s position in Apple.

This entry was posted in Stocks, Technology. Bookmark the permalink.